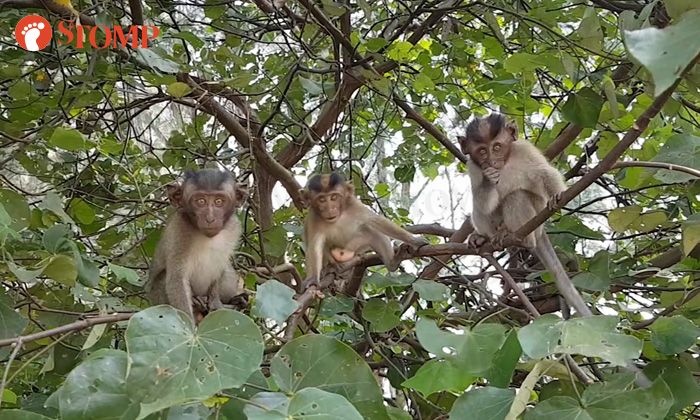 A troop of monkeys was spotted near the west entrance of Coney Island at about 10.30am on Apr 4.

Stomper Casey was cycling on the said island, which is a 133-hectare island located off the northeastern coast of Singapore within the town of Punggol, when he caught sight of the monkeys.

He said: "There were about nine monkeys, and they were eating and playing around, eating leaves from trees mostly.

"That was the first time I saw so many monkeys in one place, I was really entertained.

"They were also not aggressive and were just doing their own thing."

Casey also added that it was pretty delightful to be able to see Singapore in a new light.

"It shows us another side of Singapore, the nature part, not just at the Zoo but also in other parts of the country."

Related Stories
Monkey business at Yio Chu Kang private estate after troupe breaks in to forage for food
'Lone ranger' out on the prowl for friends... or food
Monkey helps itself to 'breakfast buffet' at Coney Island trash bin
More About:
monkeys
animals
nature