Stomper rushes to help man who collapsed on pavement in Marsiling: 'He walked like someone suffering from stroke or cerebral palsy' 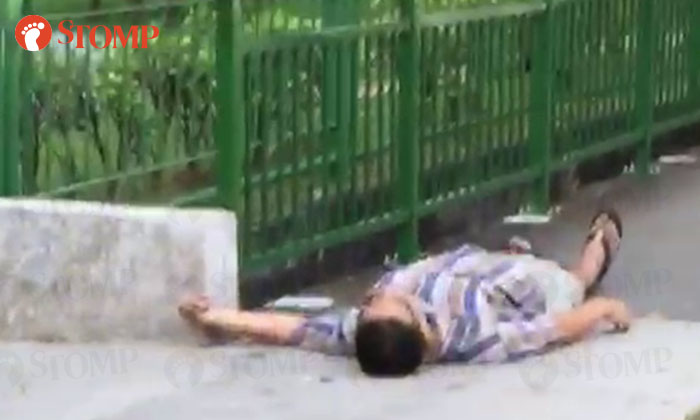 Stomper Sagittarian Dude was on his way to do volunteer work when he saw a man collapse onto a pavement at Block 202 Marsiling Drive.

Sagittarian Dude shared videos with Stomp of the incident, which happened on Thursday (July 11) at about 1.45pm.

Due to its sensitive nature, Stomp will not be publishing the video.

As a certified first-aider, Sagittarian Dude told Stomp that the man was 'walking like someone suffering from a stroke or cerebral palsy.'

He said: "I watched him for a while, saw him take two big steps from the railing and before he could reach the next railing, he fell backwards and hit his head."

In the video, Sagittarian Dude walks towards the man to find out "what's wrong with him."

The man can be seen lying on a pavement with a mobile phone near his head.

Saggitarian Dude asks the man if he is okay, to which the man responds by moving his eyes and blinking.

He then picks up the man's phone and asks if he needs an ambulance.

He told Stomp that he called for an ambulance at about 1.46pm and they arrived about 12 minutes later.

'The man's pulse was inconsistent. He was more responsive after the 12 minutes but he was showing signs that were similar to people suffering from a stroke.'

One of the paramedics helps the man up into a sitting position and asks him what had happened.

The man was able to speak at the time but it is unclear what was mentioned.

Before the man was brought onto the ambulance, Saggitarian Dude confirms with the paramedics that they are holding onto the man's phone.

Saggitarian Dude said he hopes that by telling Stomp, the man's friends and family will be able to get wind of what has happened.

In response to Stomp queries, a Singapore Civil Defence Force (SCDF) spokesman said: "SCDF responded to a call for assistance to 202 Marsiling Drive at about 1.45pm.

"A person was conveyed to Khoo Teck Puat Hospital."

Stomp understands that the man was conscious when conveyed to the hospital and his condition was not life-threatening or critical.

Related Stories
Man suffers head injuries after accident leaves him trapped in car: "There was blood all over his body"
Motorcyclist, 51, taken to hospital after skidding along Yishun Avenue 1
Motorcyclist killed and pillion rider unconscious after accident, lorry driver assisting with investigations
More About:
Marsiling
collapse
scdf
ambulance