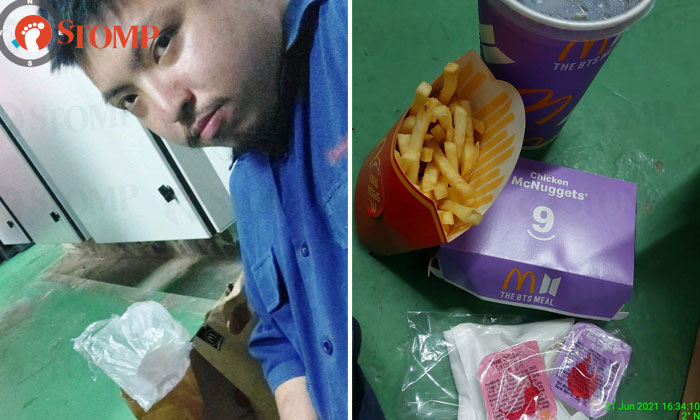 After a delay due to the phase 2 (heightened alert) period, the much anticipated BTS Meal by McDonald's launched on Monday (June 21).

BTS fans, otherwise known as BTS Army, across the island scrambled to order the meal to either support the Korean K-pop idols, McDonald's or both.

This included Stomper Wei Sien who decided to get the special edition meal and said it was "very nice".

"I officially wanted to support GrabFood and also McDonald's by ordering the meal," he said.

"They have served us for many years.

"I think the BTS Meal price is suitable for me to buy.

"The sauces remind me of Japan and I would definitely buy again."

The BTS Meal in Singapore is delivered in a BTS-branded 9-piece Chicken McNuggets box and drink cup. The meal costs $8.90 and the packaging is available while stocks last.

Other Stompers alerted Stomp to several listings on Carousell featuring the purple packaging, some going for more than $100. 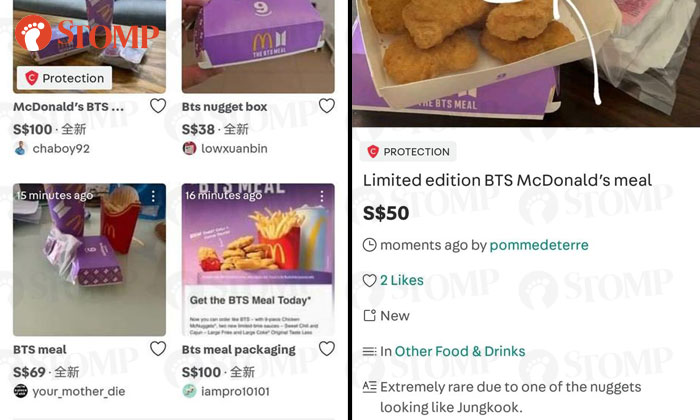 Other creative types took to social media to teach their fellow BTS Army how to preserve the packaging forever with just a pair of scissors and a customisable coffee cup.

Related Stories
Missing McDonald's? You can get them on Carousell... for as high as $70k for a burger
'I'm selling my My Melody holder on Carousell for $1,001': TNP columnist
Entrepreneurial Singaporean sell Macdonald's Monopoly labels online
More About:
McDonald's
review
k-pop
korean idol
idols
fan
fans