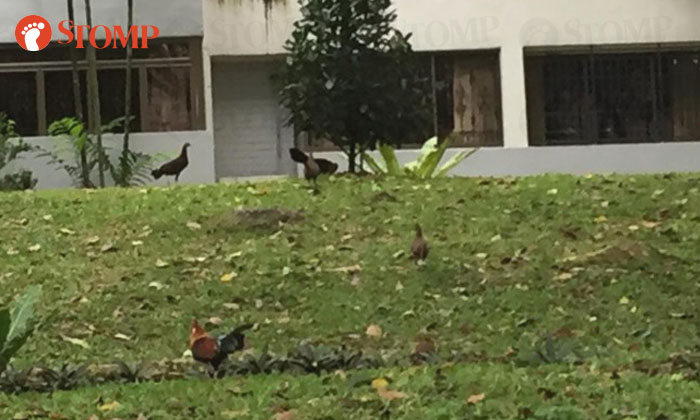 After a heavy downpour on Oct 23, chickens were seen roaming around Braddell View just behind Block 10Q.

Stomper Luca said he had just finished having lunch at about 3pm and was having a conversation with friends, when he saw the chickens roaming around the footpaths there.

He said: "I was absolutely shocked! I lived in Singapore for four years and I never imagined seeing a bunch of chickens walking around an estate, minding their own business."

Luca captured photos of the chickens and shared them with Stomp.

His friends, who are residents of Braddell, had not noticed the chickens before either and they were equally surprised.

Luca said after a while, he walked around to look for more chickens, but could not find them.

"The chickens were obviously wary of the humans around them but caused no trouble at all.

"The residents must be used to seeing them because I was the only one trying to get a good picture!

"Made me think of the ‘kampung’ days many cab drivers seem fond to reminisce about," he added.

Related Stories
Why did the chicken cross the road at Tampines?
How many chickens can you see roaming around grass patch near Block 266 Tampines Street 21?
Lau Lup looks up after hearing chirping in Toa Payoh -- and makes cool sighting
More About:
nature
chicken