Stomper pulls driver out of car that overturned on PIE 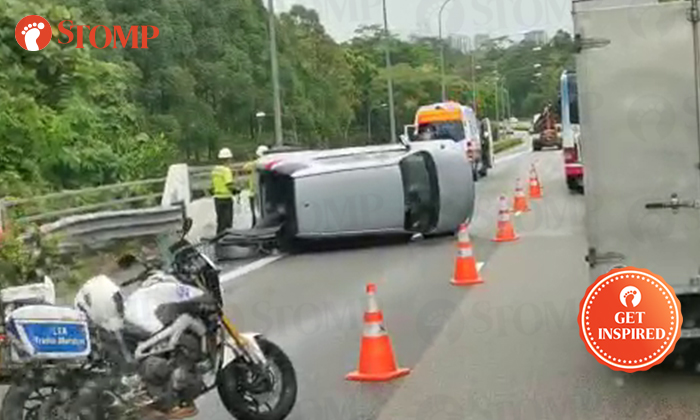 A Stomper helped pull a driver out of a car that had overturned along the Pan Island Expressway (PIE) on Tuesday (Oct 22).

Several Stompers alerted Stomp to the accident that occurred at about 2pm.

Stompers Yan, Kohji and Lim contributed photos and videos of the accident.

Yan told Stomp: "I was driving from Stevens Road towards Woodlands at about 2pm.

"As I was exiting Bukit Timah Expressway (BKE), I saw that a car had overturned and the driver was still in the vehicle.

"I stopped in front of the car and left my van.

"The driver was panicking and he didn't seem to know what to do.

"I told him to relax and with the help of another driver, who had also stopped nearby, we managed to help him out of his car through the back door.

"I tried to help direct traffic away from the site of the accident so that other drivers won't enter the lane.

"I was hoping that this could prevent another accident from happening since it was still drizzling and the road was slippery.

"I felt a bit proud since I managed to save the driver and I'm glad that nothing worse happened.

"Through this, I try to remind myself not to speed and drive safe especially when it's raining."

Responding to a Stomp query, the police said: "At 1.58pm on Oct 22, the police were alerted to an accident involving a car along PIE towards BKE.

Stomp understands that the car overturned after the driver lost control of his vehicle.