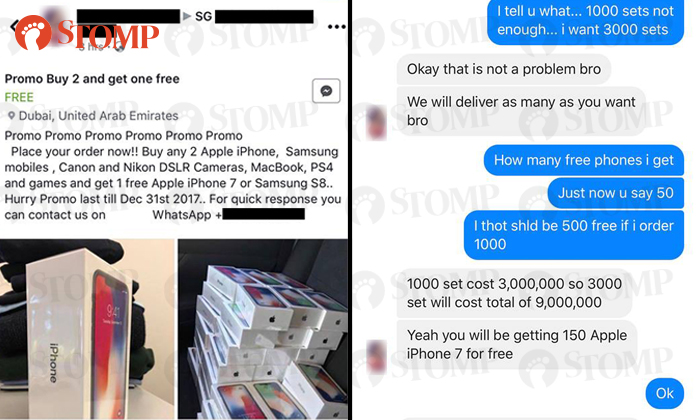 The 'promotion' was posted in a local Facebook group and was also accompanied by photos showing numerous iPhone handsets.

Sounds too good to be true? Well, that's because it's probably isn't true.

Stomper Yuanquan decided to play along with the seller, who had messaged him privately on Facebook.

The seller does not seem to be too skilled at mathematics either, telling Yuanquan that he would get "50 pieces of iPhone 7 for free" instead of what should be 500.

Things took an even more hilarious turn when the Stomper said he wanted 3,000 iPhone Xs instead and was told to transfer a deposit of 5,000 Saudi Riyals (around S$1,796) to a bank account in Nigeria first.

Check out the full conversation by browsing the gallery above.

Related Stories
Police reports made after woman offers attraction tickets at discounted prices then goes 'MIA': Stomper paid her $1,200 in July
How this girl brilliantly trolled online scammer will make you LOL
How S'pore guy trolls scammer claiming to be from 'Bank of China' will make you LOL
More About:
funny
fail
scam
text