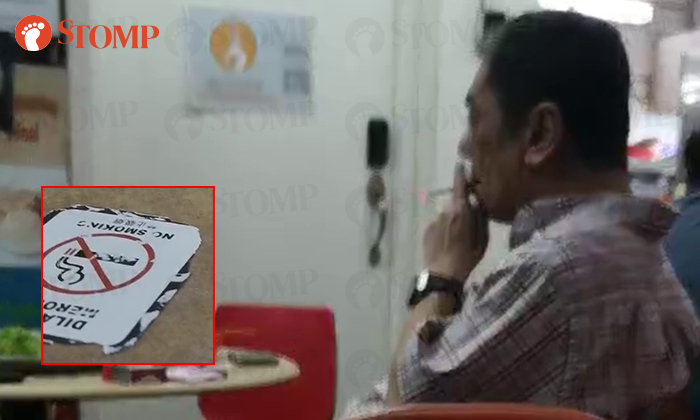 Submitted by Stomper Puffing Away

A Stomper was irritated by a man who was puffing away at a coffee shop along Beatty Road in spite of a non-smoking sign.

Stomper Puffing Away was having dinner with his friend at the coffee shop at about 8pm on Friday (Nov 29) when he filmed a video of the man.

He told Stomp: "This man was sitting at the table next to my friend and me.

"He was already sitting there when I arrived at the coffee shop and was puffing away before he ate.

"He smoked for about 10 minutes. My friend and I found it irritating so we found another table and changed seats.

"I don't live in this area but it's a coffee shop I've been to several times.

"This is the first time I've seen this man. A lot of people smoke at the coffee shop but they don't do it in the non-smoking area.

"My friend and I felt offended but we didn't confront this man.

"I can't remember the name of the coffee shop but it's the first one along Beatty Road."

Related Stories
NEA officer sacked after he was caught vaping just after issuing summons at Beach Road
Stompers slam girls caught smoking on bus: "There are consequences to your actions"
Photo of cabby pleading for leniency: He was given 'saman' of $200 for smoking in taxi, says NEA
More About:
inconsiderate
smoking
cigarette
coffeeshop