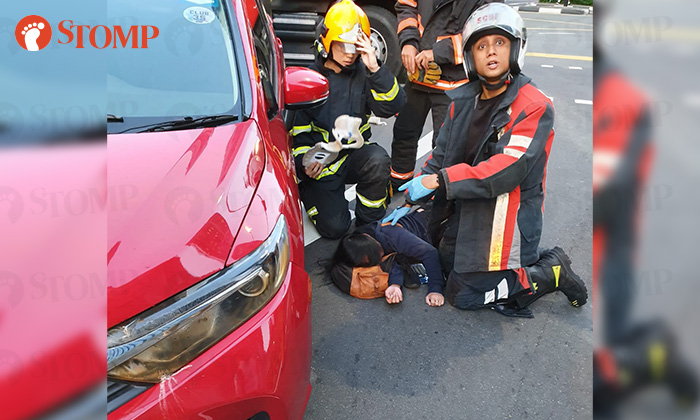 A Stomper, his passenger and several passers-by united to help a pedestrian who was trapped under a Honda car in an accident at the junction of Anson Road and Maxwell Road on Friday morning (Jan 17).

Stomper Ghrame was sending his passenger to work when they went past the site of the accident.

He contributed photos of what he saw and said: "I was driving from Maxwell Road towards the Marina Coastal Expressway when I noticed there was a red car stopped further up at the junction.

"As I drove by slowly, I saw someone's head popping out from under the car and I told my passenger Rakesh about this.

"My passenger's a regular in the army and he was going to work at Changi Naval Base.

"I stopped my vehicle in front of the car and we both went to help.

"I started shouting for passers-by to help out and there were some construction workers in a passing lorry who helped lift the Honda and pulled the woman out.

"Rakesh found out that the woman felt pain at her chest area and suspected she probably had broken some ribs.

"She was having a hard time breathing and felt pain after taking 4 breaths.

"Rakesh didn't move her much and decided to help her to lie on her side. She was screaming in pain and we were worried she could sustain more injuries if she was moved.

"The Honda driver was in a state of shock and I saw that he was bleeding at his mouth area too. The impact must have been very bad for the lady to be under the car.

"There was a Caucasian guy at the scene who told me that he witnessed the entire accident.

"I told him that he and the driver had to stay to speak to the police so they can provide evidence along with any in-car camera footage.

"The ambulance later arrived with two fire engines and one fire bike. Rakesh spoke to the Singapore Civil Defence Force (SCDF) personnel and subsequently handed the matter over to the SCDF.

"Thank God Rakesh was my passenger. He's trained in how to handle incidents like this.

"We left the scene at about 7.35am and I dropped him off at work at about 7.45am. Hopefully his commanders give him a positive appraisal for what he's done today.

"I hope everything's well for the pedestrian. She looked pretty young and I just feel sorry that this happened to her before Chinese New Year.

"I also hope that Rakesh's superiors can understand why he was slightly late to work.

"We'd like to thank everyone for helping, because if it weren't for them, we wouldn't be able to render that assistance."

Responding to a Stomp query, the police said: "On Jan 17 at 7.07am, the police were alerted to an accident involving a car and a pedestrian at the junction of Anson Road and Maxwell Road.

"The 29-year-old female pedestrian was conscious when conveyed to Singapore General Hospital.