Stomper, his dog and neighbour help to extinguish rubbish bin on fire at Tampines St 33 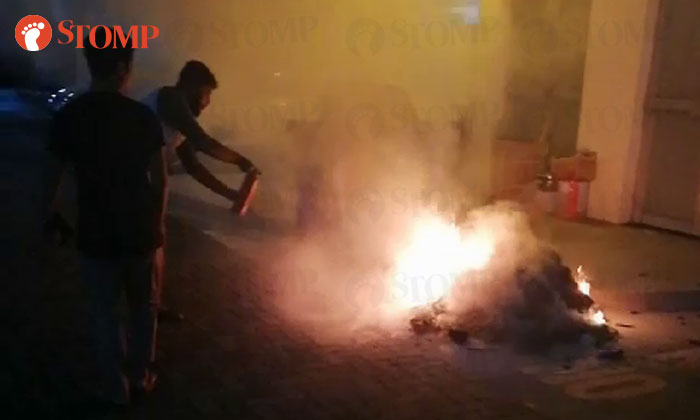 A rubbish bin caught fire at Block 351 Tampines Street 33 in the early hours on Wednesday (Oct 31).

Stompers Weijin and Vijhay alerted Stomp to the fire and shared videos taken at the scene.

Weijin said that he discovered the bin was in flames thanks to his dog.

"My dog was barking non-stop which is very unusual for him," he told Stomp.

"I then heard crackling noises coming from under my block."

Weijin, who lives on the eighth floor, then went down with his brother to see what was happening.

"At first we thought it was firecrackers but then realised that one of the green bins was on fire."

Weijin then alerted his neighbour, Vijhay, whom he knew had a fire extinguisher at home. He also called the Singapore Civil Defence Force (SCDF).

The neighbours then rushed down to extinguish the fire.

"I took a video but didn't manage to capture all of the firefighting," Weijin said.

"I think we managed to bring the fire down to half," said Vijhay, who was trained by the Police Coast Guard.

"We were just using a small extinguisher I keep at home in case of emergencies."

Soon afterwards, the SCDF arrived at the scene.

The SCDF told Stomp that they were alerted to the fire at about 12.49am.

The fire was extinguished by SCDF using one water jet.

"Kudos to both my neighbour and my dog for being so vigilant," Weijin said.