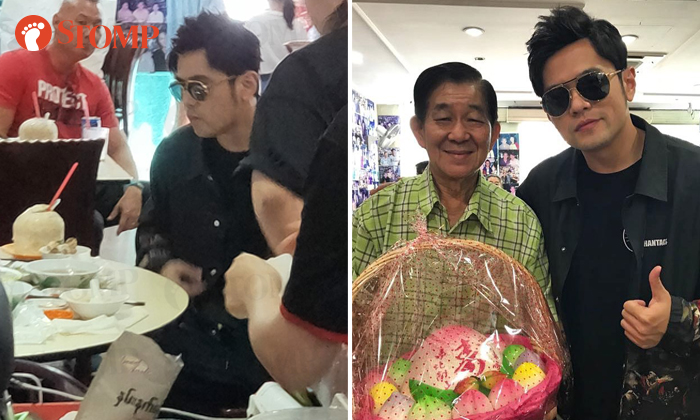 Mandopop star Jay Chou made a surprise visit to the Balestier outlet of Founder Bak Kut Teh on Saturday afternoon (Aug 25).

Stomper Vivi was at the eatery at around 2pm and snapped some photos of the 39-year-old celebrity, one of which showed him drinking from a coconut.

Chou was also seen posing for pictures with the eatery's founder, Mr Chua Chwee Whatt, who was celebrating his 73rd birthday.

Vivi said: "Jay Chou was with his bodyguards.

"Only the boss got to to take pictures with him. His bodyguards stopped any strangers as I think they didn't want his lunch to be disturbed."

On its Facebook page, Founder Bak Kut Teh also shared a photo of Chou and Mr Chua, who was holding a hamper.

Opened in March 1998, Founder Bak Kut Teh Cafeteria along Balestier Road is known to be a favourite haunt for celebrities.

Besides Chou who is a regular of the eatery, it is also frequented by Chow Yun Fat and Eason Chan.

Related Stories
Female fan runs into Jay Chou at Taiwan cafe, no longer has regrets in life
China has knock-offs for everything -- even Jay Chou
This is NOT a drill: Mandopop king Jay Chou announces surprise visit to Singapore
More About:
Jay Chou
celebrity
entertainment
restaurant