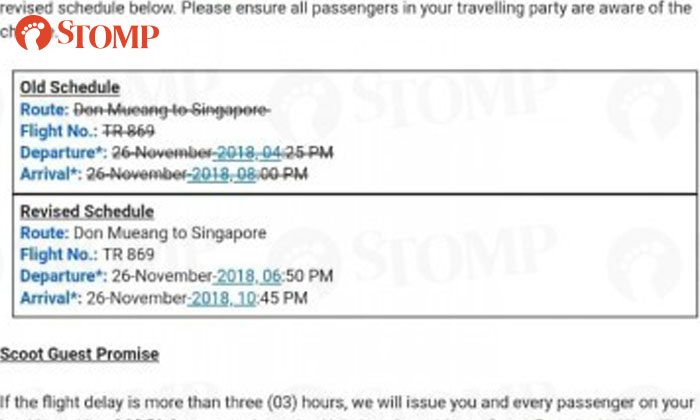 Scoot passengers who were bound for Singapore on Nov 26 from Bangkok were frustrated when their flight was delayed for over 24 hours.

The flight TR869 was scheduled to depart Tokyo for Singapore via Bangkok, but returned to Narita International Airport in Japan due to a technical issue.

A Stomper alerted Stomp to the flight's delay and said: "I was on holiday with my family in Bangkok and booked tickets for a 4.25pm flight on Nov 26 from Don Mueang International Airport to Changi Airport.

"Then we were told that the flight would be delayed till 6.50pm the same day.

"I was ok with the wait as I understand that safety is the number one priority.

"Later in the day, I was informed via email that the flight would be rescheduled to the next day (Nov 27) at 10.10pm."

The Stomper shared with Stomp that food and lodging were provided for them and fellow passengers.

"We were also transferred to the hotel, IBIS Bangkok IMPACT."

On Tuesday (Nov 27), the day of the rescheduled flight, the Stomper said he received another email at about 12pm, local time.

"We were updated of an earlier flight that we could take at 5.10pm from Suvarnabhumi Airport instead of the Don Mueang International Airport as originally planned," he added.

In response to a Stomp query, a Scoot spokesman explained that flight TR869, which was scheduled to depart Tokyo for Singapore via Bangkok on Nov 26 at 9.35am local time, returned to Narita International Airport due to a technical issue.

The spokesman said: "Engineers immediately began rectification works, but in view of the expected time required, a decision was made to ground the aircraft instead.

"Consequently, flight TR869 was retimed to depart Tokyo for Bangkok on 27 November at 3.50 pm local time, and to depart Bangkok for Singapore on Nov 27 at 10.10pm local time.

"Where possible, affected customers bound for Singapore from Tokyo have been re-accommodated to flight TR899 departing for Singapore via Taipei."

He also said that Scoot mounted an additional flight TR8869, which departed at 5.10pm local time on Nov 27, to ensure that affected passengers in Bangkok could return to Singapore as soon as possible.

The Stomper took flight TR8869 and landed in Singapore at about 9.15pm.

The spokesman added: "Some passengers were re-accommodated on TR611, which was scheduled to depart Bangkok for Singapore at 6.15pm local time, and was up-gauged to an aircraft with more seats.

"Meanwhile, accommodation and meals for customers in Tokyo, as well as Bangkok inconvenienced by the delay, were arranged where necessary.

"Safety is our top priority, and we sincerely apologise for the disruption caused to our customers’ travel plans," the spokesman added.

The Stomper sent screenshots of the updated flight schedules.