Stomper finds maggots in box of raisins, gets refund and Ferrero Rocher chocolates from supermarket 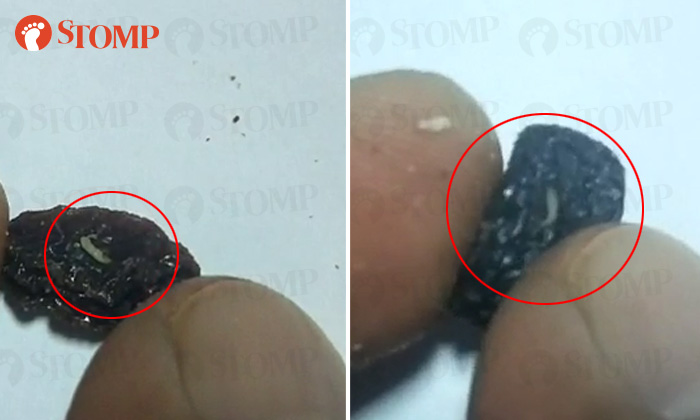 A Stomper found maggots in 10 Sun-Maid boxes of raisins from Giant Supermarket at Choa Chu Kang Avenue 5 on Sunday (Sep 23) at around 1pm.

In a video she shared with Stomp, white-coloured maggots can be seen inside the raisins.

The Stomper had purchased the Sun-Maid raisins for her daughter to take to school.

At first, her daughter consumed a few raisins at about 12pm on Monday (Sep 24) before finding a maggot inside one of the raisins.

She highlighted this to her teacher who later informed the Stomper.

"When my daughter arrived home, she complained that her stomach was painful and did not feel like eating," said the Stomper.

"When I checked the other packets at home, I poured the contents of the other boxes of raisins on a table.

"I was shocked to find more maggots in the other raisins."

A spokesperson from Giant Supermarkets have confirmed that a full refund was given to the customer.

The customer was also given a complimentary box of Ferrero Rocher chocolates.

DKSH Singapore Pte Ltd further added that they will be working with Giant as well as the customer to look into the matter.