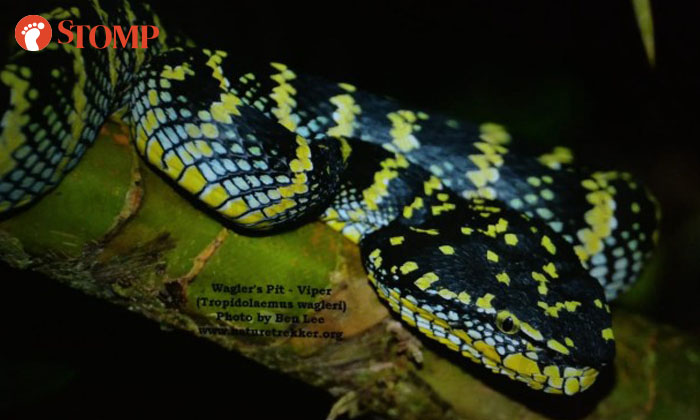 Stomper Ben Lee stumbled across a venomous snake at the Bukit Timah Nature Reserve after eight and a half years of looking for it.

Ben, the founder of Nature Trekker, which is a nature conservation organisation, had seen a Wagler's pit-viper lying in the bushes on Oct 27 at about 5.56pm.

The last time Ben saw this species of snake was when he was featured in an online television show eight years ago, deep in Chestnut Nature Reserve, trekking towards Bukit Panjang.

As a wildlife conservationist, Ben has been collecting data of wildlife in Singapore, with this particular viper as a priority target to find on his list.

According to Ben, it was about to rain and the nature reserve was dark.

He was walking through an area looking for interesting creatures when he caught sight of bright yellow spots in a bush.

He approached the bush and saw the female viper.

In this incident, he waited for people to pass before taking pictures, to avoid attracting attention.

Ben said: "It is tough to find this reclusive snake.

"Most of the time, people come across the male vipers, which are as thin as a person's middle finger."

Ben told Stomp that the male vipers are not as attractive and large as the females.

He added that they do not have bold yellow and green patterns on their body which female vipers do.

"Males only have plain green bodies with some red spots," said Ben.

"If you come across a snake, do not stay too near it or harm it," he added.

According to Wikipedia, the Wagler's pit-viper is sometimes referred to as the temple viper because of its abundance around the Temple of the Azure Cloud in Malaysia.