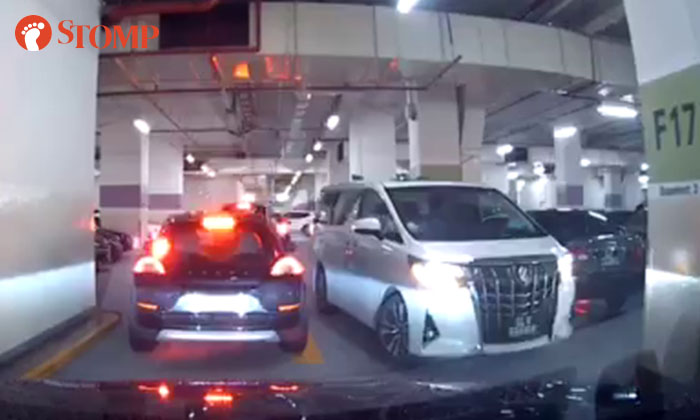 A driver was filmed going against the flow of traffic in a carpark at Basement 3 of Takashimaya at about 1pm on Friday (Nov 29).

Stomper Rickie was visiting a store at the shopping mall when he witnessed this incident.

He contributed a video showing what happened and told Stomp: "I was driving as usual and saw a vehicle that was coming towards me.

"I first noticed this vehicle as its hazard lights were turned on.

"I was alone in my car at the time and I saw this vehicle coming closer towards me.

"Initially, I thought it was an honest mistake. There was a lot of space for this driver to do a three-point turn and correct his mistake.

"However, the driver kept driving in the opposite direction and towards me with the vehicle's hazard lights on."

Rickie added: "It's an obvious act. He knows he's in the wrong but he's simply ignoring it.

"This lane the driver was in was heavily used. Traffic is one-way and a lot of vehicles have to drive in from where he's at so that they can enter the carpark.

"He's lucky that there weren't any vehicles coming in then, or else an accident could happen. This was very dangerous.

"I didn't confront the driver and I didn't notice anyone else confront him either.

"I think there isn't a point in confronting him. If an argument were to happen, things could get ugly."