Kids play cricket in middle of the road at Tanjong Rhu: 'It's a recipe for disaster' 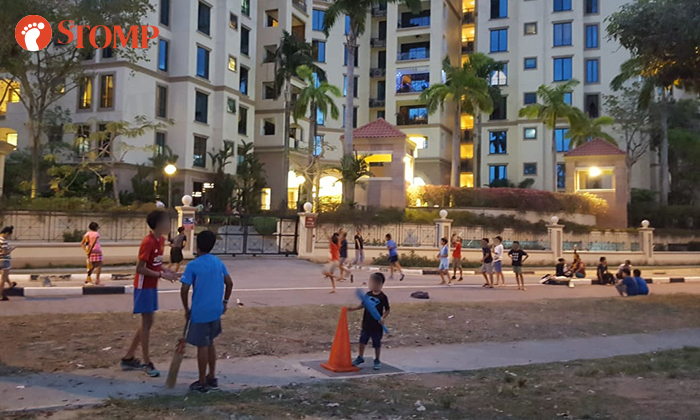 A Stomper was concerned after she saw some children playing cricket in the middle of a road on Wednesday (Oct 16).

Stomper Sheila was on her evening run at about 7pm when she went past the group of children.

She contributed photos of the scene and told Stomp: "This is a recipe for disaster.

"I occasionally run past Pebble Bay condominium along Tanjong Rhu Road, but this is my first time seeing this group of children.

"I saw the children playing cricket while some adults are sitting on a divider in the middle of the road.

"I stopped running as I saw a girl swinging back and forth with her whole body on a pole.

"It's public property and it's like vandalism, so I went nearer. The girl stopped as I snapped her pic but I didn't confront them.

"It's a safety issue. It reminded me of the toddler who ran off in front of the temple and got knocked down.

"I was running with my running group so I needed to catch up with the rest.

"I should've stopped to warn them. If this happens again when I run past, I will."

Sheila also added that she didn't know any of the people there personally.

The Stomper went for her evening run again the next day (Oct 17) and noticed a group of boys playing soccer.

It is unclear whether this is the same group of children as the one she spotted the day before.

"People are still sitting on the road divider. I was concerned about safety and public property too. Many a times, I've seen how people take our cleanliness, safety, security and property for granted," said Sheila.

According to comments on Stomp's Facebook post, it is believed that the road the children are playing at has been closed due to ongoing construction works.

Nevertheless, may the kids remember to be careful as they have fun.