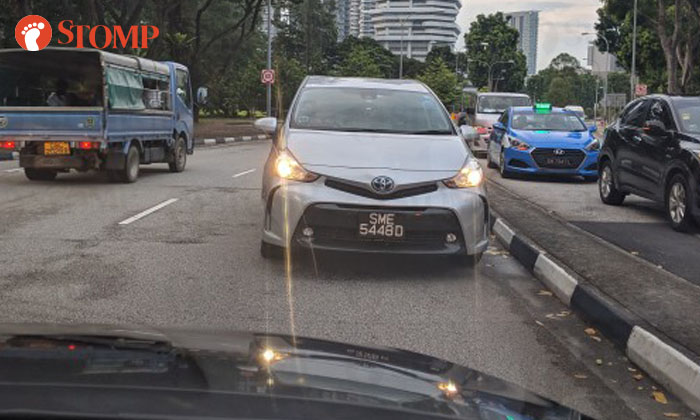 A Stomper was driving from the Central Business District (CBD) towards Kallang along Republic Avenue, when he came face-to-face with a driver headed in the opposite direction as him on Oct 23 at about 6.30pm.

The car had a blue private hire sticker on it and there was a person sitting in the back seat, whom the Stomper believed was a passenger.

The Stomper said: "I was going straight and suddenly this car was coming towards me.

"I stopped my car, and he stopped his car. We looked at each other.

"If I was going any faster, I might have hit him."

The Stomper was driving in the extreme right lane of the flow of traffic, heading towards Kallang.

He believed the car was coming from the lane next to him, which had the opposite flow of traffic.

He suspected the driver was preparing to turn right and said: "He filtered into what he thought was the lane on his extreme right, and ended up facing the opposite direction, which was the lane I was in."

Since the car was blocking the Stomper's way, the Stomper said he had to manoeuvre around the car to continue making his way.

"As I drove by, many other cars were honking at him for blocking the road," he added.

Related Stories
Merc, Audi and Honda drive against traffic at Prinsep St to 'dodge ERP' along Bencoolen St
Driver of SLD2702G spotted going against traffic twice in a day: Man with kids in car had to swerve to avoid him
Man with a death wish cycles on road shoulder of PIE
More About:
driving
driving against traffic