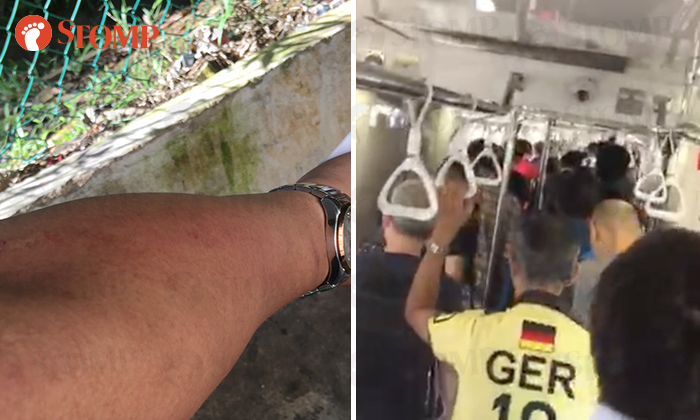 Stomper Azli was one of the passengers in the train which hit the rear end of the stationary train.

Azli was in the last cabin of the train at the time of the incident.

“I was on the train heading to Joo Koon when the train came to a sudden stop, and there was a loud bang.

"The impact (of the trains hitting each other) was quite strong.

“All passengers were thrown forward including me.

“I was scratched on my left hand though it’s not that serious.

After the incident, an announcement was made over the systems asking for passengers to move forward to the first cabin.

They were then directed to the operator cabin where they alighted the train.

Facebook user Mei Anne was also on the same train during the incident.

She, along with other passengers reportedly fell on their backs.

“So I’m on the train that hit the other one in front!

“And we fell on our backs because of the fall.

A joint statement by SMRT and the Land Transport Authority (LTA) was issued on LTA's Facebook page which read:

"This morning at 8.18am, a train heading in the direction of Tuas Link Station stalled at Joo Koon Station.

"the second train moved forward unexpectedly, and came into contact with the first train.

"23 passengers and 2 SMRT staff sustained light to moderate injuries, and have been conveyed to Ng Teng Fong Hospital and National University Hospital.

"SMRT and LTA are investigating the incident."

In a statement issued by the LTA at 4.14pm, the number of injured victims was revised.

"There were 28 injuries in total, including three walk-ins at Ng Teng Fong General Hospital later in the afternoon. The Ministry of Transport, Land Transport Authority (LTA) and SMRT are in touch with these injured passengers to offer the necessary assistance.

"Out of the 15 sent to the National University Hospital, one declined treatment and returned home, and 13 received treatment and have been discharged. One passenger is currently warded for observation.

"A total of 13 injured (including three walk-ins) were treated at Ng Teng Fong General Hospital. Nine have been treated and discharged, two are being treated, and two others are warded for observation."