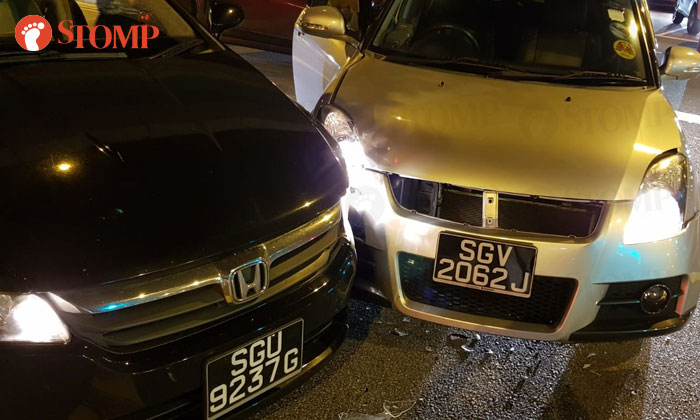 Stomper Steve is appealing for witnesses with video footage who might have caught an accident he was involved in along Serangoon Road on Thursday evening (Nov 22).

According to Steve, the incident happened at about 7.49pm while he was driving towards Potong Pasir.

"The driver of a Suzuki Swift coming from my left ran the red light and crashed into the right-front side of my car," he told Stomp.

He added that he and his wife had sustained minor injuries from the impact.

"We went to the doctor with neck and back pains," he said.

"My wife also suffered leg pain while I had some pain in my hand from the sudden jerk movement."

"I believe there were car owners behind me who have a camera in their cars and may have taken footage during the time of the accident," he said.

"I just need the video footage from our good Samaritans."

Steve has since made a police report regarding the incident.

If you have any video footage of the accident Steve was involved in, kindly contact Stomp at stomp@stomp.com.sg or WhatsApp 9384 3761.