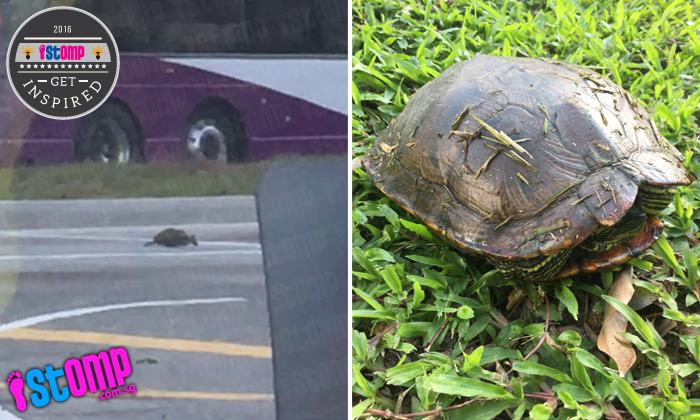 A Stomp journalist saw a turtle trying to cross the road -- and getting stuck midway -- while on her way to work this morning (Jun 7) at around 9am.

The incident happened at the junction of Yishun Avenue 1 and Avenue 4.

As there was heavy traffic due to it being peak hour, the Stomp journalist decided to exit her vehicle and bring the creature back to safety.

"My father was driving me to work when he pointed out the turtle crossing the road to me.

"At first I was just observing it (hence the video below), but I realised that it risked being run over due to there being so many oncoming vehicles.

"I got my dad to stop by the road side and let me alight, before I ran to retrieve the turtle.

"What stuck out to me was how all the oncoming vehicles stopped for me when they saw what I was trying to do. It took me awhile to pick the turtle up as it was heavy and muddy, but nobody honked at all.

"For that, I'm very grateful."

Let's hope the turtle finds its way back home instead of trying to cross the road again.

This is not the first time wandering turtles have been found in urban areas and had to be brought back to safety.

Earlier in April, Stomper Marc shared how he found a red-eared slider in Khatib and escorted it back to a reservoir nearby.

And in February, car camera footage showed how a driver picked up a turtle that was crossing the road and gave it a lift back to the river.