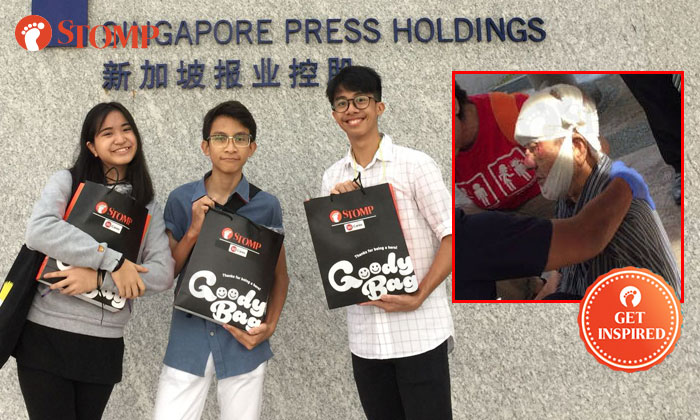 Netizens were heartened when Singaporeans from all walks of life stopped to help an old man who had fainted and hit his head at Boon Lay on Nov 8.

Stomper A was one of them and shared a video of the incident that happened at the junction of Jurong West Street 62 and Street 64 with Stomp.

He lauded those who came to help without hesitation despite their initial shock at the situation.

He mentioned a lady who was trained in first aid and a group of students from a secondary school nearby.

After Stomp asked for those who were at the scene to reach out to us, Nathania Lim from Jurong West Secondary School contacted Stomp within a day.

Nathania, Muhd Aqasha Jaafar and Joshua Juarez came down to Stomp's office on Nov 14 to talk about what happened.

They found out that they had "kena Stomped" by a schoolmate of theirs.

The three friends were walking towards Jurong Point when they saw the old man ahead of them fall down and hit his head against a pillar.

"I ran to him and tried to wake him up but he was unconscious for about 20 seconds," said Aqasha.

"When he got up, blood started gushing from his nose and forehead."

The 15-year-olds were alarmed at the amount of blood.

"We were shocked and did not know what to do," said Nathania.

However, they managed to think clearly enough to call for an ambulance.

When the ambulance arrived near the location it appeared to be turning into Jurong Point, opposite the road, so Aqasha and Nathania ran toward the traffic lights to wave at the driver and guide him to the right place.

When asked how people reacted to them being identified for their good deed, Aqasha quipped that his mum said, "Wah! You're popular now, ah?"

For Nathania, she felt happy when her mother commended her for doing a good deed.

Joshua's parents had similar sentiments for their son.

The students added that some of their teachers had found out about what they did too as one teacher arrived at the scene a few minutes after they did.

"A few teachers knew about it and thanked us for stopping to help," said Aqasha.

Stomp presented Nathania, Aqasha and Joshua with Stomp Goody Bags as part of our efforts to recognise everyday heroes and highlight heartwarming deeds.

Related Stories
Singaporeans from all walks of life help old man who fainted and knocked his head on pillar at Boon Lay
Heroic Stomper Stone who helped multiple accident victims: "You don't have to be a genius"
One FM DJ meets his Prince Charming when his shoe sole comes off just before event at Shangri-La
More About:
heartwarming
kudos
heroes
injured
helpful
inspiring
Stomp Goody Bag