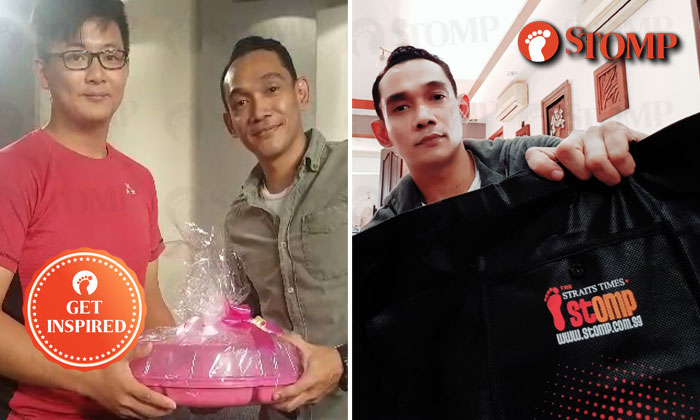 When Bobby witnessed an accident involving a motorcycle and a car at Woodlands Avenue 10 on Jun 8, he immediately jumped to help.

Being a firefighter with the Sakra Emergency Response Brigade at Sembcorp Industries, he has been exposed to such emergency situations before.

The motorcyclist had been flung onto the road following the collision so Bobby immediately went to give him first aid.

After doing a primary assessment, he found that his left scapula was fractured and that there was a gash on his left leg.

He then decided to bring the victim to a safer area to conduct a secondary examination.

His quick thinking and medical knowledge helped the victim before the ambulance arrived to send him to Khoo Teck Puat Hospital.

Upon seeing the Stomp report on the accident, the victim's son, Steven contacted Stomp in order to get in touch with Bobby to thank him.

Stomp set up a time for the two to meet at our office at Toa Payoh North yesterday (Jun 12).

Steven spoke on how his father had just been discharged from the Intensive Care Unit and was now in stable condition.

"His ribs were broken and so was his scapula," said Steven.

"His spleen was also ruptured which caused the internal bleeding.

"He is still having breathing difficulties due to his broken bones."

As Steven updated us on his father's progress, he became emotional and frequently reached out to Bobby in appreciation.

"I've been doing this for the past 15 years so the fear in me doesn't exist," said Bobby. "When I see something happening, it is in my nature to just go and help."

He believes that his experience in the fire service and the training provided by his company contribute to his ability to act fast in emergency situations.

On being Stomped, Bobby was humble and said:

"I love to help people and I guess being Stomped shows people I'm doing my job.

"I think it's a good thing so that other riders and motorists know to help when they see anything happen on the road.

"If you do not know what to do, just call the ambulance and stay by the victim.

On behalf of his family, Steven expressed his gratitude to Bobby for helping his father when he was in need.

Seeing how Hari Raya Aidilfitri is approaching, Steven thoughtfully prepared a gift for Bobby and his family: A biscuit tray.

Stomp presented Bobby with a Stomp Goody Bag for his kind act, as part of our efforts to recognise everyday heroes and highlight inspiring deeds.

Know someone who deserves a Stomp Goody Bag or had a heartwarming encounter? Share your story with us at stomp@stomp.com.sg or WhatsApp (+65) 9384 3761.