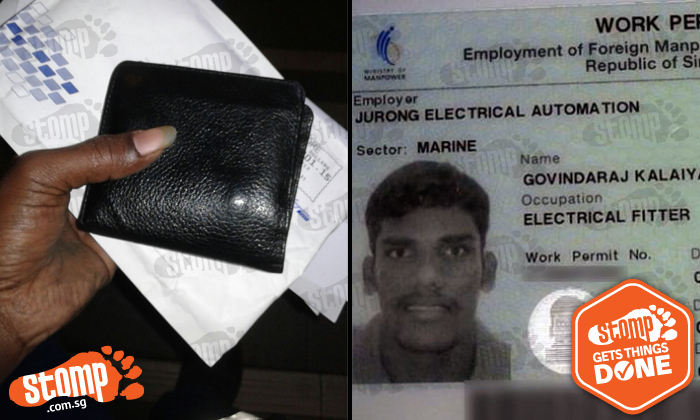 A worker, who misplaced his work permit and wallet, received these items back thanks to a kind soul and a Stomp post, he said.

On Dec 26, the worker, Govindaraj Kalaiyazhagan, took to Facebook to appeal for help after losing his permit and wallet at Khatib MRT Station.

Stomp subsequently carried a report on his post, which detailed that his wallet also contained his work-related pass and Indian voter's ID.

Govindaraj also indicated that his ATM card and money were in the wallet as well, but not as important as the other items.

A photo of the permit that he posted on Facebook indicated that he worked as an electrical fitter at Jurong Electrical Automation.

After Stomp's report went viral, Govindaraj said he received all the items he had misplaced, intact.

A kind soul had found these items and mailed them back to his company, who received it yesterday (Jan 8).

Govindaraj said that when he arrived at work today (Jan 9), he was surprised to have all his missing stuff returned to him.

"The person who returned it did not leave a from address on the envelope," said Govindaraj in a phone interview with Stomp.

"Singapore has such sweet people. I would like to say thank you to the kind individual who returned the items, as well as Stomp for its report."

Related Stories
Help! Have you seen my wallet containing my work permit and ID I lost at Khatib MRT station?
How Stomp has made a difference in people's lives
Woman gets PAssion Card back: She did not know it was lost till she saw Stomp report
Stomp gets things done
missing items returned