Woman gets PAssion Card back: She did not know it was lost till she saw Stomp report 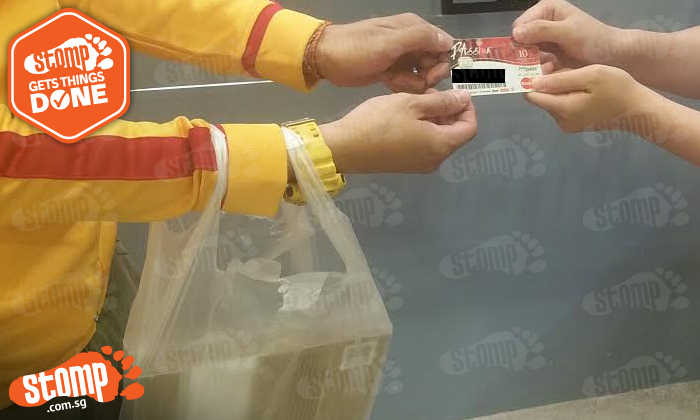 A commuter who found a woman's PAssion Card managed to return it to its rightful owner with the help of Stomp.

Stomper Andi who has a Facebook group Lost + Found @ ConnexTaxi, said he also posted on his group, but found that it did not have enough reach as he has about 4,000 members.

He decided to enlist the help of Stomp's extensive reach, and appealed through Stomp's Lost and Found.

Karen, who reads Stomp, did not even realise her card was missing till she saw the article.

Andi recounted that he saw Karen drop it and then alight the bus, and that he was too late in reaching out to her.

The duo met up at Stomp's office to return the card earlier today (Sep 5).

"I thought she looked like she was playing Pokemon Go," he laughed. She later said she was not.

"Thank you," Karen said to Andi as they both shook hands. The grateful woman also bought a box of Ferrero Rocher chocolates to thank the man for returning her card.

Related Stories
Help! Have you seen my gold-coloured bracelet I lost on the way from Ang Mo Kio to Tiong Bahru?
Is this yours? Honest Stomper finds ring with name and date engraved on inside at Bugis MRT station
Stomper is offering $50 reward for safe return of bag he lost at Block 210 Jurong East St 21
Did you leave your ATM card and polaroid photo behind at bus stop beside Rivervale Mall?
More About:
lost
Stomp gets things done