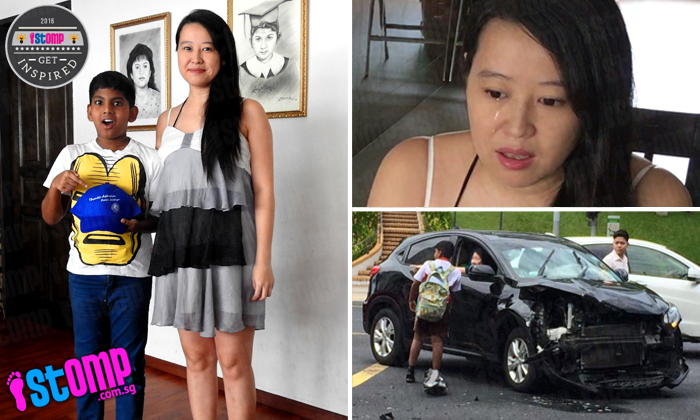 The 12-year-old boy who was hailed a hero for checking on victims involved in a two-car accident in Yishun on May 31 finally got to meet the injured and pregnant female driver whom he had aided.

In an exclusive interview with Stomp, both parties shared their first-person perspective of the accident and had an emotional exchange.

Ashvin Gunasegaran from Yishun Primary School had been on his way home from a remedial lesson, when the two-car collision occurred at the junction of Yishun Ring Road and Yishun Avenue 2 at around 1.10pm.

His first instinct was to selflessly rush to the aid of the victims of the accident, despite many vehicles trying to drive around the stationary cars and his friends telling him that it was dangerous.

Not only did he make sure that they were not seriously injured, he also stayed with them until the ambulance arrived.

In a Facebook post written by Ashvin's sister, Laava Gunasegaran, she described what the boy did while everyone else either did nothing or stood around to take pictures instead.

Her post, which Stomper Suresh had alerted Stomp to, went viral and was picked up by several news publications as well.

On June 2, the Singapore Civil Defence Force (SCDF) presented Ashvin with the Public Spiritedness Award for his gallant deed.

At the event, Ashvin told Stomp about what spurred his actions at the accident scene and what he thought of his newfound fame.

Even then, his main concern was wanting to know how the accident's victims were doing as he did not get to talk to them after they were sent to the hospital.

His school principal also later presented him with a Letter of Appreciation from the Ministry of Education (MOE).

However, while many media outlets and the public have heard Ashvin's side of the story, there was little to no word about the accident victims whom he had aided.

One of them was 32-year-old Ms Jocelyn Yu, a Managing Director at a marketing company.

On June 4, Stomper Yeemar alerted Stomp to how Ms Yu was looking to reach out to Ashvin so that she could express her heartfelt gratitude personally.

Stomp arranged for both parties to meet at Ashvin's home this morning (June 11), where Ms Yu not only got to say her thanks, but also gave him a customised token of appreciation.

She also recounted what was going through her mind during the accident -- something she never thought would happen as she drove by the area all the time.

"I thought, Is this real? [It was] like a movie," said Ms Yu, who is six months pregnant with her first child.

In an emotional interview, she spoke about the many things going through her mind after she realised that she was stuck in her vehicle alone and unable to move.

Worried that her car might explode, she tried to look for signs of smoke but could not see properly as her glasses had dropped somewhere, as with her phone, leaving her with no way of calling for help.

She also tearfully described how shocked, helpless and desperate she felt, as the left side of her body had gone numb.

To make matters worse, her stomach had started to hurt.

"That was when I started crying," said a choked-up Ms Yu, adding that she was more worried about her baby than herself or anything else.

But it was a little boy who put her fears to rest when he appeared in front of her and said: "Madam, are you okay?"

It was just one question, but it made Ms Yu -- who had been unable to move, talk or call for help -- realise that she was not alone and feel much braver.

In addition, she spoke out against comments by critics that were skeptical about 'how a 12-year-old boy could have helped injured people' during a situation as intense as an accident.

Emphasising that it was not what Ashvin actually did and that the point was that he cared when so many others did not appear to, Ms Yu said, "He might have been just a boy, but he was a boy who had been willing to help and ask if you were okay.

"It gave me a lot of bravery because I was really scared."

During this interview, Ashvin also said he did not understand why his actions have become such a sensation in the media.

Speaking about how helping others in need should be an everyday norm instead of being such a big deal, he remarked, "Does that mean that kindness has died in Singapore ah?"

Get a more in-depth insight to both their perspectives in the video below, as well as see Ms Yu present Ashvin with a token of appreciation -- a customised blue cap with both their names.