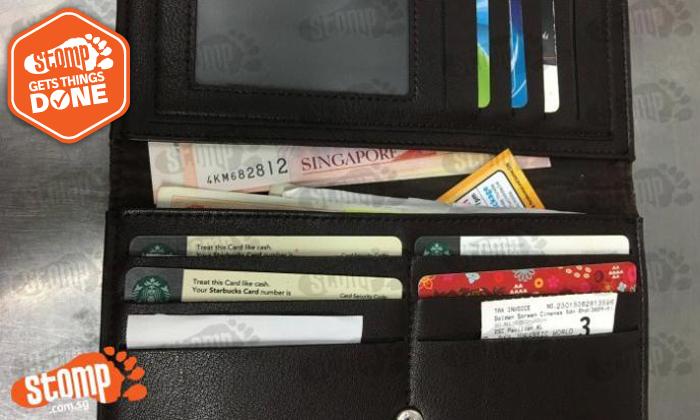 The girl who lost her wallet at a Subway outlet in Bukit Gombak MRT Station on July 30 was reunited with it earlier today (Aug 3).

In an earlier report, Stomper Ayren, who is a manager at the store, said her employee had found the 'Boris' wallet at the counter area at around 2pm that day.

The black wallet contained some cash, an EZ Link card as well as three Starbucks cards, but no contact details.

After Ayren's report was published on July 30, the wallet's owner wrote in to Stomp the following day (July 31) to identify herself.

Stomp passed her Ayren's contact number so that she could arrange a day and time to pick it up from the Subway outlet.

Although Ayren was not around when the girl came by to collect her wallet today afternoon, the Stomper had informed her staff about it as well as taken thorough steps to ensure that the item would be returned to its rightful owner.

In an interview with Stomp, the wallet's owner said:

"I only found out that I had lost my wallet a few days after, and I was about to contact the MRT control station when my friend chanced upon the Stomp article and texted me about it.

"As for the collection, Stomper Ayren kept it safe in the Subway outlet which I left it at, and informed the staff that I was going to collect the wallet.

"Initially, I worried that the staff would randomly pass my wallet out to anyone who came and asked for it, but they were really thorough in ensuring that the wallet was returned to the rightful owner.

"I am really grateful that Stomper Ayren posted the article.

"However, netizens commenting on the article definitely should not have blatantly assumed that Ayren had an ulterior motive when posting it.

"She, as a store manager, has a tightly packed weekly schedule, and it shouldn’t be surprising to all that she does not have the time to make a trip down to the police station to file a report on my lost wallet.

"Despite having the choice of putting it aside and not doing anything about it, she took the initiative to act upon this incident, and eventually found the owner of the wallet and returned it with everything still intact; this at least should deserve some form of credit.

"As for me, I’ll definitely make sure to put my contact details in my wallet, in case such an incident happens again!"