Stomp finds out if pets are allowed in hawker centres 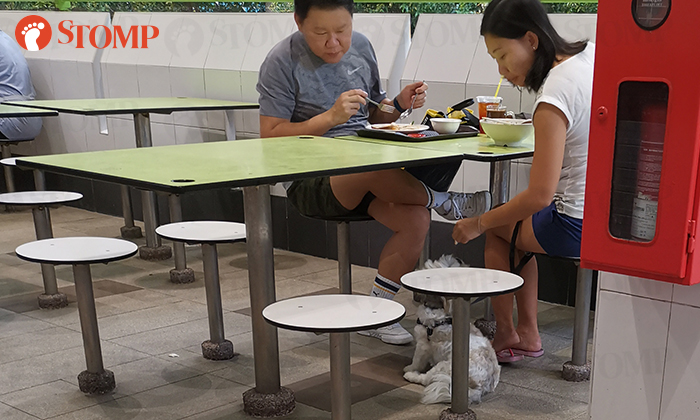 Are pets allowed in hawker centres?

Stomper Tan was confused when he saw a couple with a dog at Tanjong Pagar Plaza Market at about 1pm on Sunday (Nov 24).

He contributed photos of what he saw and told Stomp: "I was having lunch with my wife when she saw the dog.

"She said: 'How come this is allowed?'

"I was surprised and we turned to see a signboard indicating that pets aren't allowed there.

"I don't know if this is allowed and I want to find out.

"There must be a clear line. If it's allowed, remove the sign. If not, then make it known to the public so everyone can be more aware.

"Then again, if this is allowed, what's going to happen if the dog poos?

"Even if the pet owner cleans it up, the stench will still be there and it's not hygienic.

"Maybe if we're in a garden then it's all right, but not in a food centre where people are eating.

"I think it'll be fair if these pet owners bring their pets in their own trolleys. If they shit or urine, it's in their own compartment.

"Bringing the pets around like that is not hygienic at all.

"I love pets but I just think this scenario isn't good.

"I'm not sure if the law has changed. Whether pets are allowed or if this is a one-off case where people are unaware.

"I thought that the signboard was too small though. It was about half the size of an A4 paper and it should have been highlighted in red.

"This isn't a complaint but if this is wrong, something should be done about it.

"The standard should be defined so everyone can be more aware and public conditions can be more hygienic."

According to the Singapore Statutes, the Environmental Public Health (Food Hygiene) Regulations states that "no person shall bring any live animal into, or cause or permit any live animal to be brought into or kept in, any licensed premises."

Licensed food establishments should display a "sufficient number of suitable notices" in a conspicuous place to indicate if live animals are prohibited within the licensed premises.

Notices should also indicate if guide dogs and/or pets are permitted.

The regulations state that guide dogs and dogs that are kept as pets must be kept under proper control and be held in a leash.

The guide dog and/or pet should also be restrained from straying or causing annoyance/nuisance to any person or animal, or damage to any property.

In these places where pets are allowed to be brought in, people are not to feed the animals with any item, such as utensils, that will be used to consume food by humans.