Steven Lim looking for 'pretty decent ladies' with over $250K in CPF to marry and buy condo, any takers? 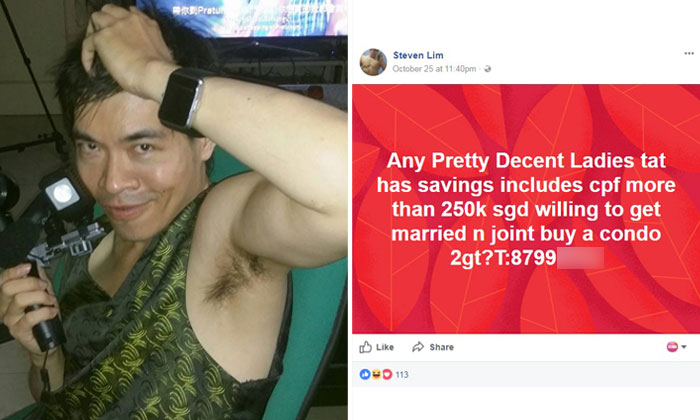 Calling all single ladies, if you think you fall into the categories of 'pretty' and 'decent', 'Superstar Steven Lim kor kor' has a proposition for you.

The YouTuber, who gained prominence for his shenanigans at the 2004 edition of Singapore Idol, has taken to Facebook to declare his interest in looking for a partner to marry and to share the cost of a condominium.

Other than fulfilling the criteria mentioned at the beginning, Steven also stated that the potential co-owner of the house should also have more than $250,000 in her Central Provident Fund.

The post that was published on Oct 25, has since garnered more than 100 shares and a flood of comments.

It is unclear, however, if Steven has found anyone who is qualified enough to be bestowed with the honour of being his wife.

If you think you stand a chance, your eternal happiness may just a few clicks away...