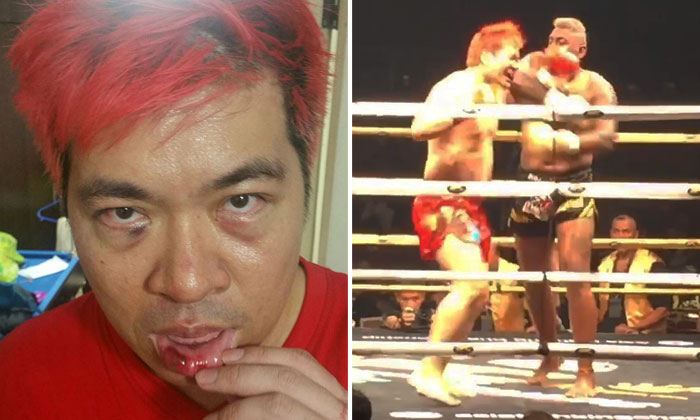 Steven Lim has taken to social media to hit back at critics who said his recent bout with Pradip Subramanian was fake.

In a lengthy Facebook post accompanied by photos that was published on Sep 27, he talked about the injuries he sustained during the fight as well as his competency in sparring.

The 41-year-old YouTube personality was supposed to face Sylvester Sim as part of a celebrity fight at the Asia Fighting Championship that took place on Sep 23 at the Marina Bay Sands.

Both men gained prominence at the Singapore Idol contest that took place back in 2004.

One day before the match, however, Sylvester pulled out of the fight, citing issues with insurance as an explanation.

In the Facebook post, Steven said that Sylvester's family was concerned about him going into the match without insurance.

Steven added that Sylvester wanted him to back out of the fight too, but he declined as he did not want to disappoint fans.

"If I back out together with Sly (Sylvester), my fans tat already bought tickets sure will scream tat I have no credibility by totally won't even turn up on the day itself! Sly wanted to quit but I can't be a quitter or I will truly let my fans down!"

Bodybuilder Pradip Subramanian was then announced as Sylvester's replacement. The 32-year-old was the president of the World Bodybuilding and Physique Sports Federation (WBPF).

During the fight, Steven emerged victorious after two rounds, beating his opponent via a technical knockout.

Subramanian appeared to be in a daze after the fight and was sent to Singapore General Hospital (SGH), where he died at around 9pm. In a preliminary medical report, SGH said that he had suffered a cardiac arrest.

Following the conclusion of the match, some have speculated that Steven's fight was staged.

In response, Steven posted photos of the injuries he sustained and said that he had an "aching headache that never goes away since the fight".

He also wrote that he received "multiple punches" on his head, "especially from the first round".

Later in the post, Steven blasted critics who questioned his competency in fighting.

"Some so-called martial experts claimed we dunno how to block. This must be a joke. If I dunno the basics of dodging and pary a punch, you think I dare to go up the ring and fight?

"You don't need to block much if u can dodge punches for goodness sake.

"Saying we dunno how to block is a true insult to us.

"The pressure in the ring is very immerse and intense and dangerous and it will affect our stamina."

Towards the end of the post, Steven explained that since both he and Subramanian accepted the fight, they had to bear the risk of becoming paralysed, breaking bones and death.

He then ended the message off with this line:

"Pradip is confirmed a respected fearsome warrior, I'm a no-quitter fearless fighter too. Thank you."

AFC Holding Singapore told Stomp in a statement that Subramanian's final medical report 'will be released in 30 to 60 days'.

The police are investigating his unnatural death.