'Stern disciplinary action' to be taken against bus captain who used phone while driving: SBS Transit 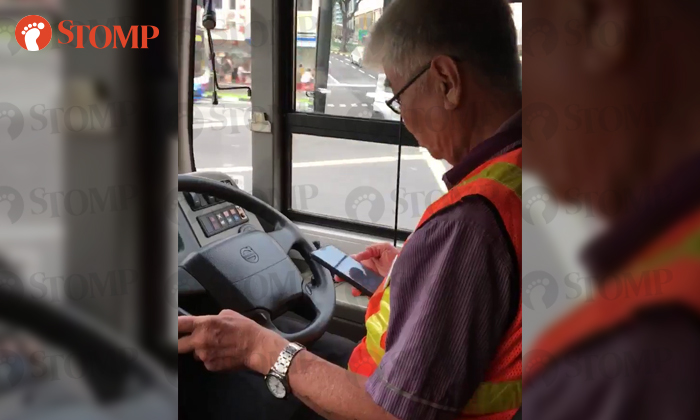 Stern disciplinary action will be taken against an SBS Transit bus captain who was caught on camera using his mobile phone while driving, the transport operator told Stomp in response to queries.

Stomper Peter witnessed the incident on Saturday evening (May 18) and recorded three videos that he then shared with Stomp.

Peter, who had boarded bus service 81 outside Kovan MRT station at around 6pm, recounted: "I got on the bus with my one-year-old son and moved towards the rear to find a seat.

"However, my son was making noise so I tried to calm him down by walking him to the front.

"That's when I noticed that the bus driver was using his mobile phone."

In two of the videos taken by Peter, the bus captain can be seen using his handphone while steering the wheel and despite the bus being on the move.

He is also seen looking downwards at his phone screen periodically.

Peter told Stomp: "The driver didn't seem like he was texting or using social media. I saw Chinese characters on his screen, like he was reading an e-book or document.

"I don't think he even noticed me filming him."

"I alighted at Anderson Serangoon Junior College afterwards and the driver was still using his phone."

In a third video submitted by Peter, the bus driver appears to be still using his phone and looking downwards even as he drives off from the bus stop where the Stomper alighted.

Stomper Peter added: "I think this is very dangerous behaviour."

Responding to a Stomp query, SBS Transit's senior vice-president of corporate communications Tammy Tan said: "We do not condone the unsafe driving behaviour of this bus captain and will be taking stern disciplinary action against him."