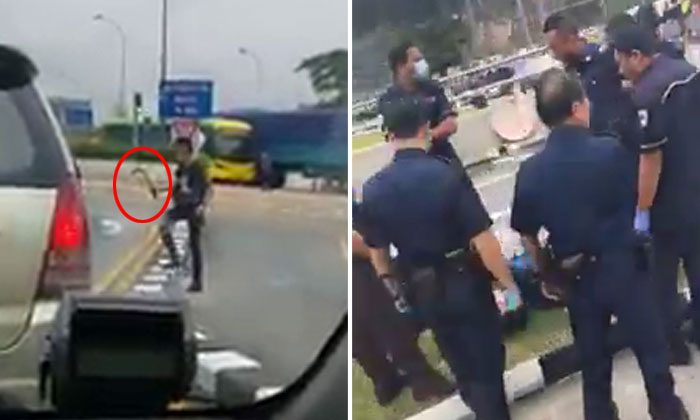 A 43-year-old man was arrested after stealing a woman's car at knifepoint, crashing it into a lamp post and then having a standoff with officers near Woodlands Checkpoint today (Jan 5).

A Stomper alerted Stomp to videos posted on Facebook by Eric Yau of the incident.

In the first video, the man is seen holding a weapon and waving it at an officer who approaches him.

He walks around with the weapon while making gestures.

In the second video, a man appears to be lying on the ground with a group of officers circling him.

In the videos, debris is also seen scattered on the road and a red car appears to have crashed into a barrier.

In response to Stomp's media queries, a police spokesman said that they were alerted to the case along Upper Bukit Timah Road at around 1.32pm.

The man was suspected to be under the influence of drugs.

"Suspected drug paraphernalia, controlled drugs, a knife, an axe and a sickle were found in his possession," said a police spokesman.

"The man has been arrested for armed robbery, possession of offensive weapons and suspected drug-related offences.