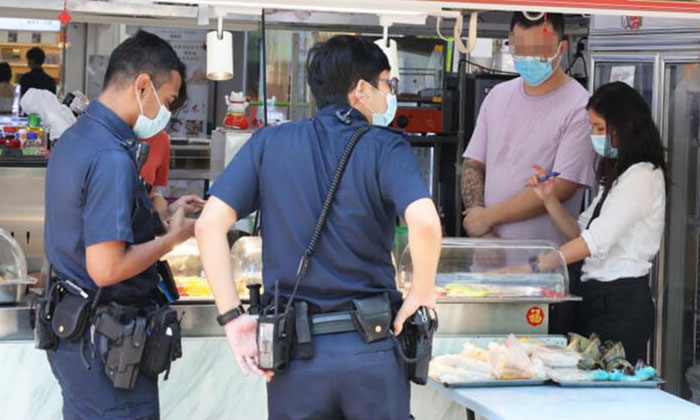 A stall owner has been accused of throwing a cup at a customer following an argument over the change given in coins.

The incident took place near the entrance of People's Park Centre on Saturday (May 28) at 1.10pm.

A passerby, surnamed Chua, who was at a nearby shop during the ordeal, told Shin Min Daily News that a woman along with her two children had bought two drinks and paid with a $10 note.

The female stall owner apparently returned her $2 worth of change with 10- and 20-cent coins.

The woman was unhappy with this and argued with the stall owner as she believed she saw that they had $2 notes.

"Afterwards, I saw a scratch mark on the mother's neck. There was a plastic cup on the ground… I think someone threw it at her," said Chua.

According to him, another stall owner – a man – stood next to the cash register and was hitting a kitchen knife on the countertop in an attempt to scare the mother.

Chua then called the police.

At least six police officers arrived at the scene, and in a statement to Shin Min, the police said a 37-year-old woman was taken to hospital.

A 23-year-old man is assisting with the ongoing investigations, the statement added.

Another person who works nearby told Shin Min this was not the first time the stall owners have caused such a commotion.

She said she would overhear the couple arguing with customers once every few days.

"Both of them are hot tempered. When they are unhappy, they would start shouting at their customers."

Related Stories
Man removes shirt and says, 'I am going to die' after getting hit with chairs at Canberra coffee shop
Famous curry puff stall at Hong Lim Food Centre split into two due to sibling feud
Man arrested after dispute over toilet queue in bar, hurling vulgarities and racist remarks at police
More About:
dispute
argument
threaten