Stall at VivoCity food court given warning after diner vomits out 'thread' in nasi padang: Kopitiam 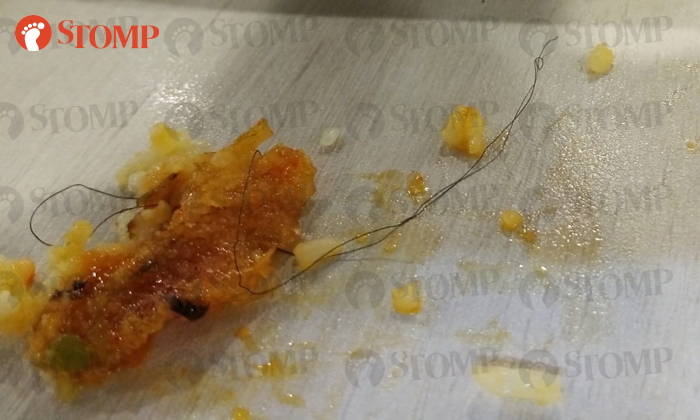 Attracted by its array of yummy-looking dishes, Stomper S.M. Ho decided to have an early lunch at the nasi padang stall in VivoCity's food court on Oct 14.

However, he ended up vomiting after a hair-like strand from his food got stuck in his throat.

S.M. Ho, who visited the shopping mall's Kopitiam food court at around 10.40am, recounted: "As I walked in, I was attracted to the Padang Lezat stall whose dishes in chilli looked nice.

"I ordered a plate of plain rice with two vegetables, plus dried fish bits. It cost me $6.80.

"As I was eating halfway, I felt something like a thread uncomfortably dangling inside my throat.

"Immediately, I vomited on the table. To the shock of my life, I saw a long black 'hair' in the food that I had vomited out. This ill-feeling made me vomit further on the floor."

According to S.M. Ho, the hair-like object was "curled up" and embedded in his food.

However, he did not return to the stall to inform its staff about what happened as he did not want to create a "hoo-ha" in public.

S.M. Ho added: "The staff were busy serving customers and I didn't want to disturb them. I also did not want to spoil their business in front of other customers.

"Lesson learnt: Do not trust your eyes to be attracted to food that may look nice, but are actually totally unhygienic."

In response to a Stomp query, a Kopitiam spokesman said it has since contacted S.M. Ho to apologise for the incident and offered him a full refund following investigations.

The spokesman said: "After intensive investigation by our service quality and hygiene teams, it is determined that the 'hair' in question is highly likely a strand of loose thread that was detached from the stall assistant’s apron."

Referring to the "isolated incident", the spokesman also said that Kopitiam would enhance its hygiene regimes and be more vigilant during inspections to ensure prevent any recurrence.

"In addition, we have issued a written warning letter to the stall licencee concerned for this incident," the spokesman told Stomp.

"We have also contacted the diner to apologise for the unpleasant experience as well as to update him on our findings and remedial actions and offered a full refund which was accepted.

"We always strive to uphold a high level of hygiene and service standards at our outlets and will take immediate action to rectify any lapse."

Diners may contact Kopitiam's customer service hotline at 6333 3344 or through email at contactus@kopitiam.biz for any feedback.