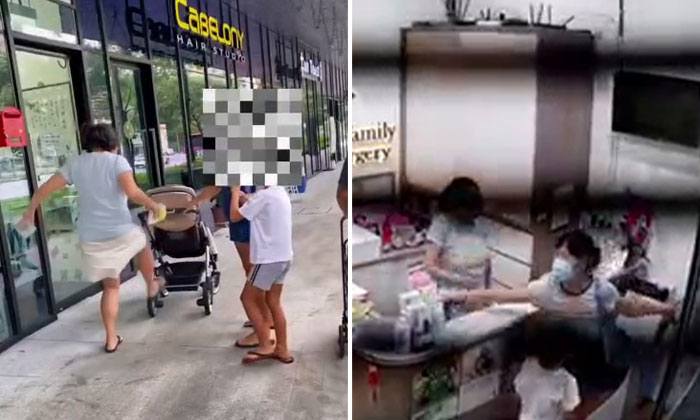 Dispute at Bukit Batok clinic: Employee 'reprimanded' and placed on leave of absence

Two women were involved in a heated argument at a clinic in Bukit Batok on Monday (Apr 18).

A video circulating on TikTok went viral after it showed a staff member from Everhealth Family Clinic and Surgery kicking a stroller in anger while confronting a woman who was with her son.

The video has since been taken down but has been reposted on other social media platforms.

So angry for what? Credit: Asan Kayo

In the clip, the mother of the boy says, "What are you doing?" and calls the clinic worker rude.

The other woman points out the CCTV camera to her while she continues to ask, "Why are you so rude to your customer, I don't understand.

"I want to come to ask why you gave me this MC (medical certificate), why are you so rude?"

The worker responds in exasperation, "You got 5 days MC!"

Meanwhile, the boy attempts to intervene between the two women and tells the clinic's staffer "we will clean up".

She tells him she is not scolding him and continues to argue with his mother.

After the first video was posted, another TikTok user shared CCTV footage from inside the clinic of what happened prior to the confrontation.

In this video, the mother is seen tossing and throwing items off the clinic's reception counter before exiting.

The Everhealth Clinic Incident CCTV footage that allegedly captures what occurred in the clinic prior to the incident in the Tik Tok video has been published on the Internet. 1 hour ago, Everhealth Medical & Everhealth Family clinic posted the following statement:- "We would like to apologize for causing public alarm over the Tik Tok video taken this morning outside our clinic. Please give us some time to look into the matter with the parties concerned. Thank you all for your understanding!" Video from Thatearl on Tik Tok

The clinic worker is in the midst of picking up the items when the other woman enters the clinic again to throw another object at her.

This is the last straw for the worker who then chases them outside.

Everhealth clinic posted an apology on its Facebook page on Monday at 10.50pm, for causing "public alarm over the TikTok video".

We would like to apologize for causing public alarm over the Tik Tok video taken this morning outside our clinic....

"Please give us some time to look into the matter with the parties concerned," it said.

Netizens have flooded the clinic's Facebook page, condemning the actions of its employee and said she should not have lost her cool with the other woman.

However, others acknowledged both women were in the wrong.

Related Stories
Rider flashes middle finger, argues with driver after getting honked at for going against traffic
'Karen' argues with FairPrice staff, accuses man of opening cream: 'Please do not act like an animal'
Man with 'knee problem' scolds commuter who told him not to put feet up on bus seat
More About:
dispute
argument
clinic