Sprinklers spraying water 'like a waterfall' inside Parkway Parade 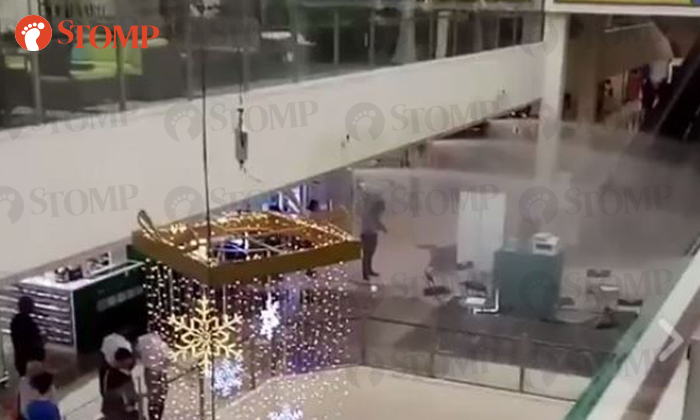 Sprinklers in Parkway Parade shopping centre were activated yesterday evening (Nov 13), startling shoppers who were drenched by the water.

Stomper Paul who came across the scene told Stomp that the water was spraying from the third floor all the way down to the mall's atrium.

'People were trying to scramble away from the water.' said Paul.

According to the Stomper, the area of the third floor outside Giant hypermarket was most badly affected.

Twitter user @CholinsM also sent us a video of the incident, showing water spraying down on the third floor near Giant hypermarket.

Paul added, "There was this roadshow happening on the third floor. Their equipment was badly damaged and they were trying to salvage what they could."

The 27-year-old warehouse administrator said that sprinklers were turned off at around 5.15pm.

Cleaning of the affected areas was already underway.

In response to media queries by The Straits Times, Parkway Parade replied that fire sprinklers were activated at around 5pm on Monday, leading to a water discharge in the mall.

"We responded immediately and affected areas have been cordoned off for clean-up works. Parkway Parade remains open for business. Investigations into the activation of the fire sprinklers are underway,” the statement said.