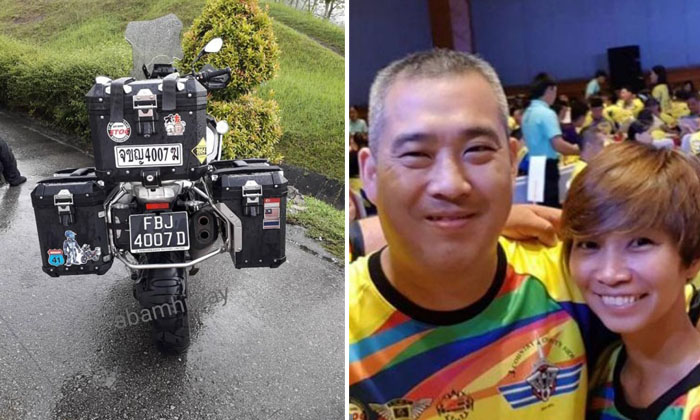 A Singaporean woman, died on Oct 31 at about 5.15pm in a road accident after being flung on to a highway in Selangor.

Pauline Leong was riding pillion on a superbike, which swerved out of control in rainy weather, said the Malaysian police.

The 42-year-old woman is believed to have died on the spot after severe head injuries near Tanjung Malim, at the Lembah Beringin junction of the North-South Expressway.

Her 43-year-old Singaporean husband, Admen Lim Beng Yaw was the driver of the motorcycle, a BMW GS R1200.

The Hulu Selangor traffic police said that the couple was on their way from Singapore to Thailand when their bike swerved out of control and hit the road divider in the middle of the highway.

Mr Lim has been warded at Slim River Hospital in Perak and suffered a broken leg.

Facebook user Shaid Tasiran, who is part of biking group Shaid Puchong Bikers, posted pictures of the superbike and the aftermath of the accident on Facebook.

In the post, Mr Tasiran cautions that an accident had occurred before in that area.

He warns everyone to be careful and to take note of other riders, especially during the current rainy season.

The New Paper had published an interview with Mr Lim in 2016 about him being a taxi driver, as well as an avid biker who would do charity work with his biker friends every month or so.

They would go to destinations around the region and make stops at old folks' homes, schools for special needs children and more, for visits and to make donations.

At the time of the interview, Mr Lim and his friends had ridden 1,800km to Hua Hin Thailand, in four days with Ms Leong as his pillion.

The couple met about 16 years ago due to their shared interest in riding.

Ms Leong was riding pillion with her friends in Malaysia and had met Mr Lim at a coffeeshop in Malaysia, which was a "weekend hot spot" for bikers.

Three months later, they got married after Ms Leong proposed to Mr Lim.

He recounted the proposal to The New Paper in 2016: "We were talking and I asked her, 'Do you think I'm Mr Right? Do you think you will marry me?' "And she said, 'I actually like you and will stay for you'. She then said, 'Why don't I propose to you?'

"I thought it was a joke but that very week she said she had already registered our names at the Registry of Marriages. She then went to buy the engagement ring."

Mr Lim said of Ms Leong at the time: "She supports me (in every way)... so I really treasure her."