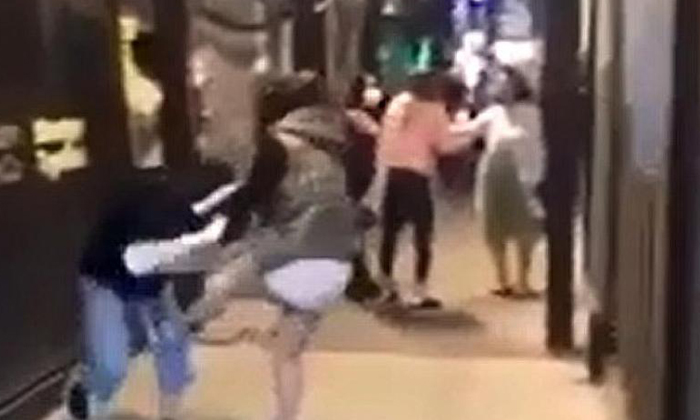 In a foreign land in the grip of a pandemic, the two young women kept to themselves in public.

But what was supposed to be a simple grocery run turned into a nightmare for the Singaporean and Malaysian undergraduates, who were verbally abused and assaulted in the heart of Melbourne in Victoria, Australia, last Wednesday.

A video circulating on social media shows the 18-year-old Singaporean and her 20-year-old friend being attacked.

Believed to be racially motivated, the incident has drawn strong criticism from the Australian authorities.

The Victoria Police said the victims were walking along Elizabeth Street near the Queen Victoria Market at about 5.30pm on Wednesday when the two alleged perpetrators began verbally abusing and assaulting them.

The area is within the city's Central Business District.

Describing the attackers as skinny Caucasians, the police said they reportedly shouted "coronavirus" repeatedly and hurled death threats at the victims.

Melbourne's Nine News reported that the students were also told to "go back to China" and were attacked when they responded to the taunts.

The 20-second video shows a woman in a sleeveless parka and white skirt grabbing one student by the hair and punching her repeatedly on the head before dragging her to the ground and kicking her.

Her accomplice, in a pink jacket, pushes the other student, then blocks her and another woman from helping the first victim.

The assault stops after a man intervenes by shouting at the assailants.

The incident was reported to the police, who said the victims suffered minor injuries.

The girls, whose faces were blurred out, later told Nine News they were now terrified to leave their homes.

Her friend said while sobbing: "I'm really scared they think it's okay to do (this) to other people."

Identifying the victims as undergrads at the nearby University of Melbourne, vice-chancellor Duncan Maskell condemned the attack and said: "This is a disgusting and unprovoked attack on two of our female students.

"These senseless and vicious attacks on two young women must never be tolerated in our community. The people who did this are a disgrace."

Calling it a racist attack, UniMelb Student Union president Hannah Buchan said the undergrads were told by the attackers to "get out of our country".

Melbourne mayor Sally Capp also condemned the attack on social media, saying: "I am appalled by the disgraceful attack on two young students... The violence displayed is completely unacceptable. It does not reflect the values that Melburnians stand for or the behaviour we expect in our city."

During the assault, one of the victim's AirPods fell off and were stolen by a man who was not involved in the attack.

Described as a 1.75m-tall Caucasian with a solid build, he was wearing a black puffer jacket and carrying a black backpack.

In a statement yesterday, the Victoria Police said they have charged a 21-year-old Melbourne woman in relation to the case.

She appeared before the Melbourne Magistrates' Court yesterday and was charged with recklessly causing injury and committing the offence while on bail.

Investigators are still trying to identify the second woman involved in the assault and a man who was allegedly with them but is not seen in the video.

In February, a 23-year-old Singaporean student was assaulted in London in an attack that was also believed to be racially motivated.

The student, who had been studying in the UK for two years, posted a photo of himself with a swollen eye after the incident.

The Ministry of Foreign Affairs (MFA) said in a statement yesterday evening that it is aware of the latest incident, and the Singapore High Commission in Canberra is in touch with the Singaporean student to render consular assistance.

The High Commission is also reaching out to local authorities to ensure the incident is investigated and dealt with in accordance with the law, MFA added.

The Ministry said it has approached the Australian High Commission here, which has stressed that the Australian authorities are taking the incident very seriously and that investigations are underway.