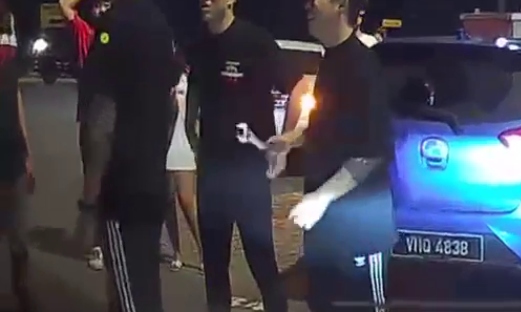 A 24-year-old Malaysian man was hit with a wrench by a Singaporean man in his 20s in Johor Bahru, said the police there.

The incident happened outside an entertainment venue in Taman Mount Austin, an area known for its cafes and bubble tea shops.

JB police said on Monday (Aug 1) that they believed the confrontation was over a misunderstanding that occurred in the entertainment venue, reported Johor’s China Press.

The police said they are looking for three Singaporean men to assist in the investigation of a case of causing hurt with a weapon.

Photos and a video of a confrontation between two groups of people were posted online on Sunday (July 31). One photo shows a white Lexus with a Singapore number plate. Another photo and the video show one man holding a wrench.

The post alleged that a Singaporean man used a weapon to injure someone and fled.

When contacted by Stomp, Lai Ku, the Facebook user who wrote the post, said: "They beat our friend."

When asked why they beat his friend, Lai Ku said they were drunk.

Lai Ku then posted on Monday (Aug 1) a photo of a police report lodged with the Malaysian police.

In the report, the complainant said that on July 31 at around 3.20am, he was in a car in Austin Heights when three men came and knocked on the driver's side window. After he rolled down the window, one man hit his face with a wrench. He suffered injuries to his nose and right eye. The three men accused the complainant of showing them an obscene sign, but he denied it. After his friends came to his aid, the three men ran away, said the complainant.

They reportedly fled in a car.

The owner of the white Lexus has made a police report in Singapore to say he was not involved in the incident even though he was in the vicinity.

"I am reporting with regards to the Facebook post by Lai Ku (someone I do not know), Goodyfeed and Malaysia News, I do not know this person, but he insisted in the post that I was the one who used a spanner and hit someone in Malaysia on July 31, 3.30 am.

"I was there, however, when the incident happened. I was in the toilet.

"In Lai Ku's post, the guy with the spanner that attacked the victim has a tattoo on his arm. I do not have any tattoos on my arms or any part of my body.

"Moreover, I was just walking towards my car and they (the victim's group) all assumed that I was the one who attacked. Therefore, I am reporting this incident to clear my name."