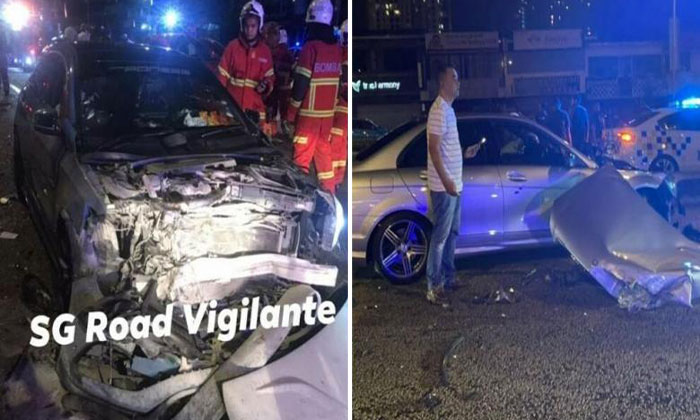 A Singaporean driver allegedly lost control of his Mercedes and collided with four cars in Johor Bahru on Sunday (May 8).

The accident occurred at a traffic junction in Jalan Serampang – a 20-minute drive from Woodlands Checkpoint – at 2:55am.

The assistant commissioner of Johor Bahru South police district Raub Selamat said the accident was caused by the Singapore-registered car, as quoted by Berita Harian Malaysia.

According to AC Raub, the driver of the vehicle was a male Singaporean in his 30s.

He was travelling in the direction away from the city centre when he crashed into the left side of a car turning right at the junction.

The Mercedes then knocked into four cars stopped at the traffic junction before it landed on the second innermost lane on the opposite side of the road.

The four stationary cars were waiting for the traffic light to turn green.

8may2022 0241hrs Jalan Serampang Johor Bahru #SMJ9008M mercedes a45 fail to conform to red light signal & hit singapore registered honda stream quoted Singapore registered mercedes a45 skidded before crashing into a road barrier and four vehicles stopped at a traffic light at Kilometer 4.5 Jalan Johor Bahru - Kota Tinggi (Jalan Serampang Intersection) in Johor Bahru, Johor early Sunday morning. Johor Bahru Selatan District Police Chief, Assistant Commissioner Raub Selamat said, in the incident at about 2.55 am, the Mercedes Benz car collided with four other cars that were stopping at traffic lights. "The accident is believed to have occurred when the car driven by a foreign man in his 30s who came from the direction of the city center skidded when it arrived at the location. "During the accident, the traffic light on the driver's route was green, but the driver failed to control his vehicle until it skidded and collided with a barrier stone in the middle of the road. "The driver then collided with four other vehicles that were stopping because of a red traffic light heading towards the city center," he said in a statement on Sunday. Raub said, however, all the drivers of the five vehicles involved in the accident suffered only minor injuries. "The Investigation and Traffic Enforcement Division of the Johor Bahru Selatan District Police Headquarters has also opened an investigation paper on the incident. "Besides that, the alcohol level test carried out found that the driver involved was also negative under the influence of the substance," he said. Kataya, the case is being investigated under section 43 (1) of the Road Transport Act 1987. https://youtu.be/qR4bLxYgtH8

The drivers of the vehicles involved suffered minor injuries, and there were no fatalities.

The Singaporean driver was not drunk at the time of the incident and tested negative on his alcohol test.

The police are calling on eyewitnesses to provide more information.

Related Stories
SCDF looking into incident where 995 responder allegedly hung up on caller
Taxi and motorcycle collide in Sengkang
'I thought we were all finished': S'pore family kicks windows to escape after car overturns in Johor
More About:
Mercedes-Benz
accident
Johor Bahru
Malaysia