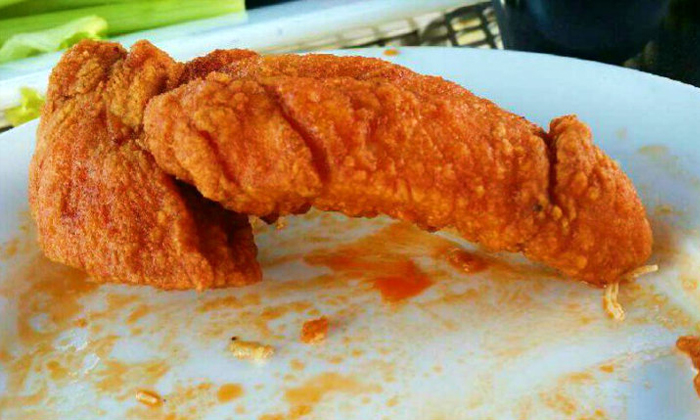 An article claiming that a 24-year-old Singaporean tourist was served "deep-fried penis" at a hawker centre in Georgetown, Penang has been circulating online.

Penang Post reported that while the publication was unable to verify the authenticity of the woman's claims, they managed to interview her and got her side of the story.

In the report which Stomper Nicholas came across, it is said that the woman ordered some fried chicken at the hawker centre for dinner, but "realised one piece looked suspiciously like a penis" upon digging into her meal.

She allegedly told Penang Post, "I don't know much about penis but I think it looked like it could be from a human. Also, at the base, there were two round pieces of meat that I think could have been balls."

According to the article, the woman asked the stall for a refund as well as compensation.

However, the stall apparently denied her request and refuted her claims.

Penang Post also said that investigations are ongoing and tests are being done to determine the origin of the "deep-fried penis".

Sounds too wacky to be true? That's probably because it isn't.

Here's why this incident is most likely a hoax, starting from the story itself:

1. Neither the stall nor the woman was named, nor are there any other details about the parties involved

2. The source of the photo used in the report was not credited to anyone

3. There is only one close-up photo of the dish

4. A reverse image search shows Penang Post is the original and only source of the story.

5. There are two versions/articles of the incident on Penang Post: One attributed it to a Singaporean tourist, while the other quoted a holidaymaker from Perth

Now, let's look into the credibility of Penang Post:

According to its 'About Me' section, Penang Post describes itself as "an English-language newspaper based in the Malaysian state of Penang", with its editorial office located in Georgetown.

However, Google search on "Penang Post' shows no related results, except for those about post offices in Penang.

This is suspicious, considering that the publication is supposed to have a long history and widespread circulation.

Even more strangely, the articles on www.penangpost.com only go as far back to 20 June 2017, making one wonder where are the rest of their archives.

In addition, other equally unbelievable and unverified stories on the website include "Penang man realises wife is cheating after finding another men's semen in her".

Browse the gallery to see the original report on Penang Post.