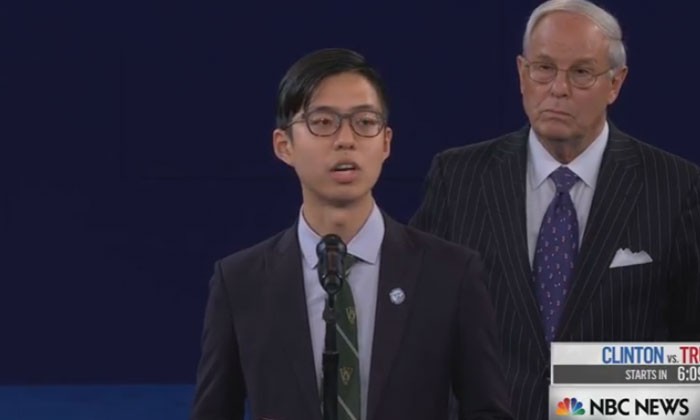 The 24-year-old was representing the host university, Washington University in St Louis, as the Student Union president.

Mr Sng spoke before a crowded debate hall, welcoming everyone to Washington University on behalf of the student body.

Coming on to thunderous applause, Mr Sng started by speaking about the birth of the United States and how the nation "was founded on a grand promise" which was memorialised by founding father Abraham Lincoln - the democratic ideal that America will "create a true government of the people, by the people, for the people".

He also commented that this "great democratic experiment has since spread like wildfire to much of the world... including to Singapore, my home".

He also mentioned democratic governments today being undermined by those "with a much different vision of the world, of their power and of their responsibilities to their citizens".

On the debate, Mr Sng described it as "providing a momentous occasion to show that while citizens might disagree fervently on issues, they agree it is important to stay engaged in the democratic process".

Looking ahead to polling day on Nov 8, Mr Sng said "citizens across this nation will cast their ballots and show the world that democracy as an ideal burns brightly in the dark".

He ended his remarks by expressing his pride on behalf of the student body towards the university for hosting the debate and "giving voice to competing ideas at the core of democracy".

The Public Service Commission scholarship holder had earlier told The Straits Times that his remarks would take on an "international perspective" and he sought to represent "both the (university) students and international students".

He is the first international student to serve as the Student Union's president. The Office of International Students and Scholars at Washington University said in its official newsletter that the role of Mr Sng in the event holds special significance. This is especially more so "considering how issues surrounding immigration policy have become so prominent in this election", it said.

Mr Sng was initially shocked to learn that he would be speaking to the crowd at the debate. He told The Straits Times: "Past student union presidents have given remarks at debates... But I was still surprised because, after all, I am an international student and I didn't think they would let me give remarks at a debate on their national elections."

The economics and mathematics major said that although he had given speeches before, he was particularly nervous about this one.

"It's quite nerve-racking, to be really honest," said Mr Sng.

"This is a very important year for the student union. It's the first time they've elected an international student to be student body president in the long history of Washington University, and this year, we were selected to host the presidential debate. So, I feel a sense of responsibility and duty to students who have elected me, and the international community," he added.

The weight of the momentous occasion was also not lost on him, as he sought to make the most of the minute of air-time allocated to him. "One of those two will be the most powerful person on earth," he said. "I have to make that time count," he told his school newsletter, the St Louis Post-Dispatch.

Nonetheless, how did Mr Sng react to not being able to vote in the election?

"Rightly, I'm not a citizen of this nation, so it makes sense," Mr Sng said in the newsletter. "But in my capacity as (student body) president, I cannot let up on my efforts to increase political engagement on campus. I shouldn't let the fact that I won't be voting stop me from that."

Mr Sng and his cohort also found a way to boost student engagement and maximise interest in the debate.

"We wanted to work from the ground up," he said. "We decided to have a programme fund so every student can apply for funding for their programs centered around the debate."

That money went toward events such as the debate between the College Democrats and College Republicans a few weeks ago.

Mr Sng also saw the debate as crucial in demonstrating the credentials of the democratic procedure.

"I think a lot of Democratic institutions around the world are being undermined by their own national events, and I think the United States, from an outsider's perspective, we always see the US as the epitome of democracy, the standard bearer," he said. "If America could send a message of renewed confidence in democratic ideals, I think that would mean a lot to a lot of people around the world," he said to the St Louis Post-Dispatch.

Mr Sng attended Jurong Junior College from 2009 to 2010, and his alma mater had expressed their pride in seeing him being given this rare opportunity.

"We are extremely happy for him and very proud of him being the first international student to be elected president of Washington University's Student Union, and being accorded this rare opportunity to deliver the opening remarks at the upcoming second US presidential debate," it said.

According to interviews with the university's student newspaper, Mr Sng said he ran to be president of the Student Union because he thought the university's financial allocation process was not transparent or streamlined enough when he tried to start a Singapore students' association.

The final-year student added that he intends to bring his approach to campus life back to the civil service when he graduates and heads back to Singapore in May. "If I have that sense of purpose and meaning in a career in civil service, I'll definitely continue for as long as I can."

Singaporean Kenneth Sng speaks on behalf of the students of Washington University at the 2nd presidential #debate (filmed from CNN feed) pic.twitter.com/74A6h5m4GL