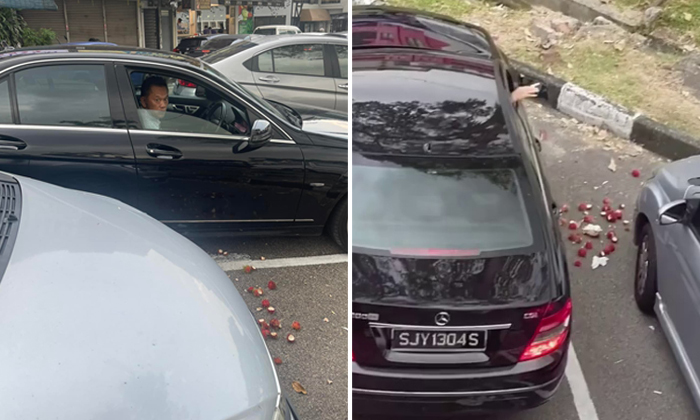 As travel restrictions are lifted, is the ugly Singaporean abroad making a comeback?

The driver of a parked Mercedes-Benz with a Singapore licence plate was caught on camera throwing rubbish on the road in Johor Bahru, Malaysia.

Next to the car under the driver's side window were scattered rambutan peels and some used tissues.

Photos and a video of the litterbug was posted on Tuesday (May 31) by a Facebook user named Zhang Zhiyi, who wrote in Chinese: "How can there be this kind of people? Can't throw rubbish in Singapore so come to Malaysia to throw rubbish."

In the video, a woman can be heard saying in Mandarin: "Look at this Singapore car, come to Malaysia to litter. In Singapore, he would be fined, but not in Malaysia. You see, he throws so much rubbish until there’s pile at the side. So shameful."

Can you be fined for littering in Malaysia?

The website added: "On top of that, there is also the Anti-Littering By-Laws applied under the jurisdiction of the respective city/municipal/district councils in Malaysia. The compound that can be imposed varies depending on each jurisdiction.

"Say you live in Subang Jaya, the maximum fine that can be handed out is RM1,000 for littering. However, for on-the-spot littering offences, offenders will only be fined RM10. Yep, you heard that right, RM10. That is cheaper than the average daily parking rate in the Klang Valley."