S'pore man who nearly died 3 years ago in Cambodia: 'I lost my dignity, my independence' 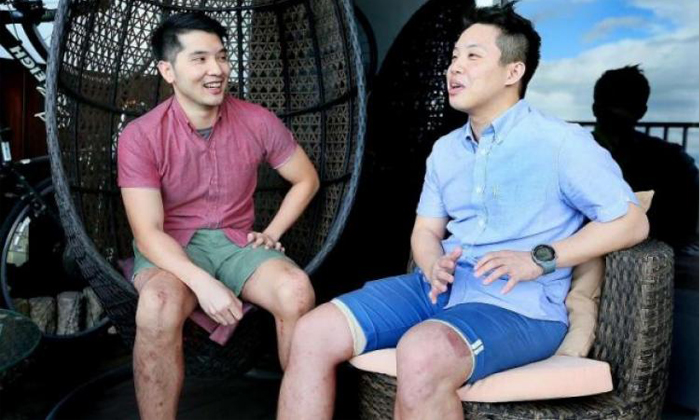 Mr Jason Lim does not recall the events leading up to the moment when his motorcycle blew up, only that he was cruising down the streets of Phnom Penh, Cambodia, before it happened in July 2014.

The crash left some 20 per cent of his body scorched by third degree burns, both of his knees dislocated, and his collarbone cracked.

When he came to about a month later, he found himself in the Singapore General Hospital (SGH) with metal rods sticking out of his legs - and no idea how he ended up there. He was in SGH for 44 days and this led to a journey of nearly two years to find out what happened.

Mr Lim, who had been on a solo backpacking trip, later pieced his story together with the help of friends, family and a pastor, who tracked him down after he went missing in Cambodia.

A car had knocked him over on his first night in Cambodia and he picked up his bike to give chase, only to crash after the other vehicle braked suddenly.

Mr Lim, now 26, will launch a book about his experiences to inspire others, including victims of trauma, tomorrow at the National Library.Part of the sale proceeds will go to The Straits Times School Pocket Money Fund and a non-profit project called Alongsiders.

"I don't have trauma, but I know what it's like to wake up to your life completely changed," he said. "I couldn't get out of bed, use the toilet, or shower by myself... I lost my dignity, my independence."

The accident left Mr Lim, who had just finished national service, with hospital bills totalling about $250,000. When he was first discharged from the hospital in a wheelchair, his mother quit her job as a teacher to care for him full-time. For four months, it took her four hours just to help him shower as his wounds had to be cleaned and dressed.

While he has fully recovered, he goes for annual check-ups and avoids high-impact sports so as not to wear out his knees.

Mr Lim, who has been working on the book full-time and giving talks, also started a website telling his story to encourage others.

He was helped by groups such as Burns Support Group, which facilitates interactions between patients and survivors and medical professionals to help in their recovery. He said there are now efforts to set up a trauma support group involving SGH staff and other survivors.

Dr Poh Seng Yew, a consultant orthopaedic surgeon with SGH, said it is important for patients to hear of others' recovery experiences. "For patients with massive injuries, a lot of times, they fall into depression and get less involved in their own recovery," said the doctor who treated Mr Lim's knee joints.

For university student Sean Suen, meeting survivors such as Mr Lim was proof that he, too, could recover well and live life to the fullest. The 25-year-old vividly recalled the night in May last year when he fought for his life alone in waters off Tioman island, Malaysia.

"It was a diving accident involving me going through and hitting a ferry's propeller underwater," said Mr Suen, who had been on an advanced diving course. He was last in his group to return to the jetty.

"No one knew I got hit... I had to fight for my own survival," he said. He had a fractured thigh bone, dislocated left hip and a puncture that nearly reached his small intestines.

By the time he was air-lifted to Singapore for treatment, his wounds were made worse by seawater. He spent about three months in SGH, where a social worker introduced him to Mr Lim.

Mr Lim said: "When Sean told me his story, I was smiling. I finally felt like I was not alone. And when I shared my story, I could see him lighten up and start to smile. I think he felt the same way I did."