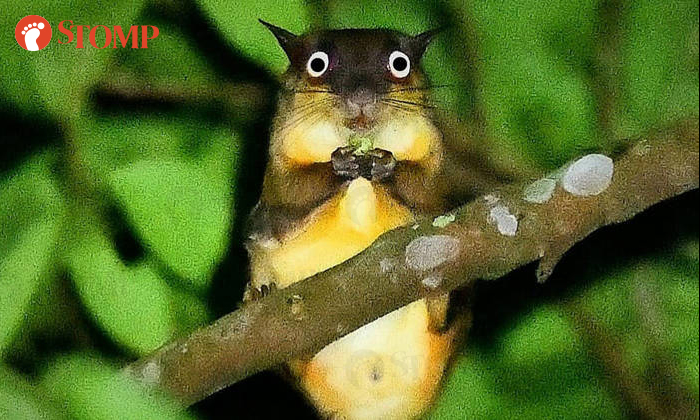 A photographer and wildlife enthusiast had an incredible encounter with the elusive Horsfield's Flying Squirrel on Saturday night (Nov 20).

Stomper John Lee, who is the founder of Wildlife Asia (Singapore), shared photos of the endangered animal.

He declined to share the creature's exact location to protect it from crowds flocking to see it, but said he had been out looking for snakes and to "conduct paranormal activity research".

John recounted: "Following my previous sightings of the critically endangered Sunda Pangolin and Greater Slow Loris that was reported on Stomp, it never dawned on me that I would get to come across another rare and endangered wildlife species of Singapore: the Horsfield's Flying Squirrel (lomys horsfieldii).

"According to the Singapore Red Data Book, the Horsfield's Flying Squirrel is listed as an endangered animal of Singapore, while the Singapore Biodiversity Records Archives classifies it as a rare species.

"This rare squirrel is native to Singapore. However, its habitat loss due to the degradation of forest is a major cause of concern to scientists, wildlife conservationists and nature enthusiasts. Its population may appear to be dwindling.

"My original plan for the trip that night was to go in search of snake and also to conduct paranormal activity research.

"During the trip, I noticed several sightings of colugos (galeopterus variegatus) and all of a sudden, I saw some flying creature on the same tree.

"I took a peek through my binoculars and to my surprise, it was the rare and endangered Horsfield's Flying Squirrel, also known as the Javanese Flying Squirrel.

"I was lucky to have my full gear ready to capture any photos that night."