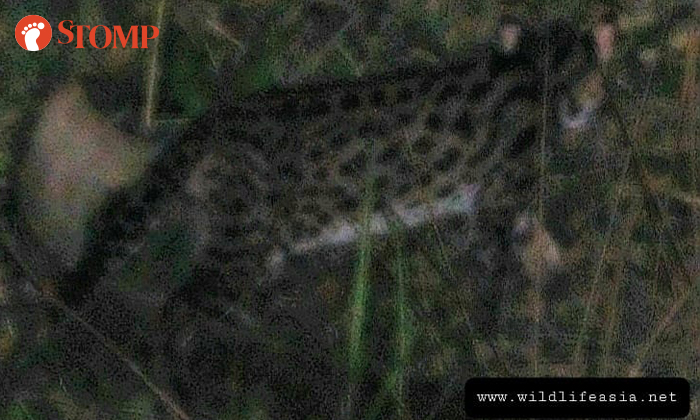 A wildlife enthusiast has finally ticked off a wish on his bucket list following his memorable encounter with a rare leopard cat in Singapore.

Stomper John Lee, founder of Wildlife Asia (Singapore), shared photos of the animal that he spotted in the early hours of Saturday (Jan 22).

He said: "I would like to share an incredible sighting of a rare and critically endangered leopard cat (Pionailurus bengalensis) in Singapore.

"I had been going in search of snakes at night when I stumbled across the wild cat, much to my astonishment and disbelief. What an unexpected appearance.

"The animal was very skittish upon sensing my presence. Fortunately, I was quick enough in capturing some shots as proof of its existence.

"Before I could take a better shot of the wild cat, however, it dashed off into the thick undergrowth and disappeared into the dark."

Unfortunately, John - who has taken stunning photos of exotic wildlife on multiple occasions - did not have his usual gear with him as he had sent his camera for servicing. As such, he only had his mobile phone camera as a standby substitute.

Nevertheless, seeing the leopard cat with his own eyes has been a priceless experience that John will never forget.

The Stomper added: "The estimated population of this rare leopard cat is less than 20 in Singapore's mainland.

"This sighting has finally closed a chapter for me as I finally checked off my bucket list to see this rare animal after years of trying. It is indeed a good new year wish for me."

Classified as critically endangered in the Singapore Red Data Book, the leopard cat is our city's last wild cat. Habitat loss as well as the global fur and pet trade are among the many threats that it faces.

The creature is native to many Southeast Asian countries and known for being elusive predators that are mainly active in the night.