S'pore has 3rd highest rate of bullying in the world: But why do bullies do it? 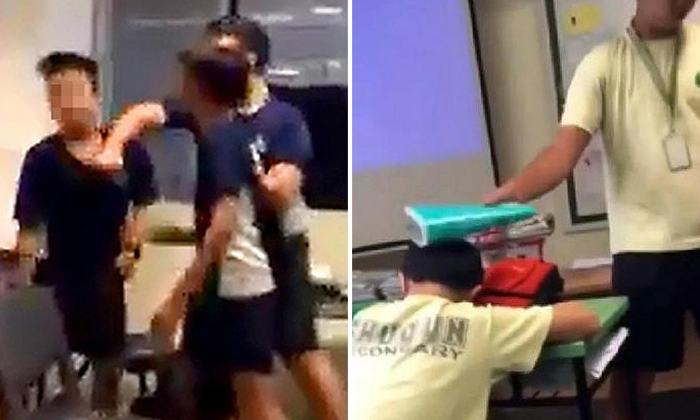 When she was 11, she started bullying a girl in class.

Wanting to be known only as Rochelle, she said she and two other girls would hide the victim's belongings like her wallet and diary before class, causing her to panic.

They taunted her, calling her "weak" and "lame" and falsely accusing her of theft.

The bullying went on for six months, until their Primary School Leaving Examination preliminary exams, as the girls buckled down to focus on their studies.

Now 19 and a student in a tertiary institution, she remembers the victim crying and asking the three girls why they were bullying her.

Rochelle told The New Paper: "We just got a kick out of making her so flustered. It was about having power over someone."

In 2015, Singapore ranked third highest in the world for bullying rates in findings published by the Organisation for Economic Cooperation and Development (OECD). Only the children in New Zealand and Latvia have it worse.

About 18.3 per cent said they had been made fun of at least a few times each month, significantly higher than the OECD average of 10.9 per cent.

And in survey results released in July, gender equality group Aware found more than half of schoolboys here have hit, pushed, shoved, or spat on another boy.

The study surveyed 809 male respondents aged 17 and 18 in tertiary institutions.

Dr Carol Balhetchet, a clinical psychologist, said bullying happens when insecure individuals want to be in control of their environment.

The former senior director of youth services at the Singapore Children's Society (SCS)added: "They will feel more confident as the bullying is a process for them to feel better about themselves."

TNP also spoke to a student in a tertiary institution, who wanted to be known only as Raihan, 19.

In secondary school, he called his peers names and punched them. He even created hate groups on Facebook.

He did not see his behaviour as bullying because he claimed he never had the intention of hurting his victims.

Said Raihan: "Boys by nature are more rowdy. When you put boys together, fights are bound to happen. To us it was just playing."

Last month, a video of three St Hilda's Secondary School (SHSS) students fighting went viral and prompted a former victim of bullying to post a screengrab of it on Instagram.

The school described the incident as a case of "fighting", but Mr Isaac Ong, 28 - a former SHSS student and a finalist on Channel 5 singing competition Final 1 - decided to act. He encouraged bullies and victims of bullying to message him about their struggles.

He told TNP he had been bullied in school for being short and for his skin colour.

Mr Ong said he used to have suicidal thoughts, and added: "When you are in your early teens, you are at a vulnerable place trying to figure out who you are. When your peers don't say positive things, you can be very depressed."

He said his Christian faith helped him through that dark period.

Since his post, Mr Ong, who has more than 3,000 Instagram followers, has received messages from seven students who have been bullied and he has been talking to them about their experiences.

An often overlooked form of bullying happens in the workplace.

In 2013, a video of a supervisor at an information technology company assaulting an intern went viral. He was sentenced to a 10-day short detention order.

Dr Elizabeth Nair, principal psychologist at Work & Health Psychologists, said people do not associate bullying with the workplace as adults are expected to be able to take care of themselves.

She said there are different types of workplace bullying like social exclusion, where the victim is left out of conversations.

Another example is when a person is not credited for good work.

The worst case of workplace bullying she has encountered was when the victim, a foreigner, was driven to self-harm and developed suicidal thoughts as his colleagues spoke in languages he could not understand.

Dr Nair said: "The person felt trapped and the social support was missing. It was a case of feeling helpless and hopeless."

Thankfully, he reached out to mental health support programmes offered by his company.

Rochellerealised the severity of her actions only in secondary school, when her mum and teacher scolded her.

She said: "Verbal abuse is the worst kind of bullying... It could stay in the person's mind forever."

Dr Sara Delia Menon, a clinical psychologist at Alliance Counselling, said: "Targeting unpopular peers who are socially excluded is likely to lend support for the bully."

Experts also agreed that victims of bullying are likely to turn into bullies later.

Dr Nair said: "Bullies may have been subjected to bullying themselves, hence they think it is normal and acceptable behaviour."

Last week, Minister for Education (Schools) Ng Chee Meng said in Parliament that bullying has no place in Singapore.

He said cases of bullying here have been stable and managed.

A Ministry of Education (MOE) spokesman told TNP that it is making moves to raise awareness of bullying.

They include providing channels to report cases, promptly following up on reported cases through appropriate disciplinary action and adopting an educational approach to help students learn from incidents.

As for Rochelle, she wishes she had never bullied her classmate.

She said: "If I had a chance to talk to her, I would apologise, but I can never take my actions back."

Why do they bully others?

Antisocial traits, susceptibility to peer pressure, narcissism and impulsivity are some of the reasons why people bully others, said Dr Sara Delia Menon, a clinical psychologist at Alliance Counselling.

She also said family issues such as domestic violence and poor parental supervision, or the loss of a loved one, could lead to an individual being a bully.

Dr Menon emphasised that there is never any excuse for bullying, but it is important to understand the reasons to help the bully make better choices.

She said a lack of empathy for a colleague can lead to bullying.

"(That is) seeing the person for utilitarian purposes only, without any compassion or care," said Dr Nair.

Mr Justin Mui, director of youth centre Lutheran Community Care Services (LCCS), said bullying can happen in schools when there is a lack of a collective spirit in the classroom.

Mr Mui, head of the LCCS Centre for Restorative Practice, said: "It is a power issue. If classmates band together and say this is my classroom and my space, the bullies will not bully anymore."

How other countries deal with bullying

Developed by the University of Turku, KiVa is an anti-bullying programme rolled out in schools for students aged six to 16.

The programme uses lessons and online games to prevent bullying, and also gives tips on what to do when involved in a bullying incident.

The country celebrates the International Day of Pink on every second Wednesday of April annually, with people wearing pink to show they are against bullying.

The initiative was started in 2007 by two students who saw a peer wearing a pink shirt being bullied and got everyone in school to show support for the victim by wearing pink a few days later.

In April 2015, Montana became the last state to pass an anti-bullying law. Bullying is now officially illegal in the country.