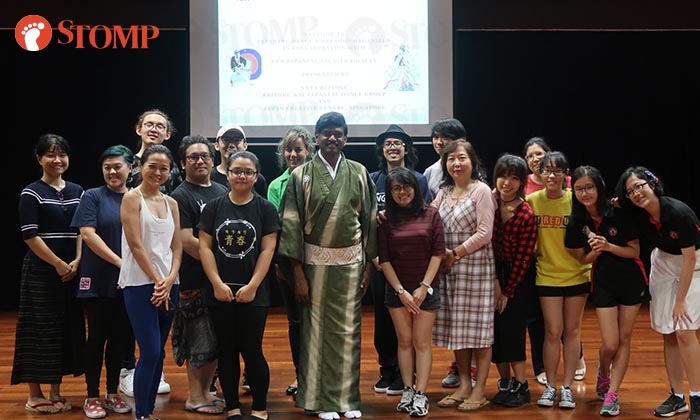 Meet this Singaporean guy who can converse in fluent Japanese and has been teaching classical Japanese dance called Kabuki since 1994.

Stomper Priya told Stomp about her uncle Mathavan because she was amazed at how he could be so fluent in Japanese.

She said to Stomp: "He's amazing. He can speak the language fluently and would be the one communicating with the locals whenever our family visits Japan."

In an interview with Stomp, Mathavan said: "I started learning the Japanese language in 1986. It was a four-year course by the Japanese Cultural Society and I was pulled into it because my colleagues were interested and had asked me to come along.

"After three months, my colleagues ended up leaving the course but I carried on.

"Initially, I was constantly tongue-tied. I was so worried whenever I converse with people in Japanese.

"There are different words to use when speaking to people of different seniorities.

"I only started getting the hang of the language when I spoke with my dance students.

"If you speak wrongly, even if it's just one word, it can be offending but now I'm a bit more used to it.

"When it comes to reading and writing, it's been very difficult. I depend a lot on the dictionary.

"I remember it being like hell. Grammar is fine though since it's similar to the Tamil language and it has helped a lot in sentence formation.

"To be able to read each and every character is very tough.

"I can recognise common words but those more cheem ones are still difficult for me. I still have to rely on the dictionary.

"I then found out that the Japanese Cultural Society also had a dance group so I joined the group out of curiosity.

"I started learning Japanese Dancing in 1988. I was about five years into dancing and had already begun doing choreography when I met my dance teacher in 1993.

"Her husband was working in Singapore then and I decided to go under her tutelage.

"But in 1994, she had to return to Tokyo since her husband's employment contract was ending. She asked me to sit for the teacher's exam and get a license.

"I was the only student of hers who was at a good level, so she asked me to take over her role as the next dance teacher.

"I was quite reluctant to register for the course and the examination since they were about $5,000. I couldn't afford it but my teacher was really firm on me becoming the next teacher, so she sponsored about half of the fees and I also gave in to her.

"I remember that the examination was at my teacher's house in Singapore. I was very nervous and a little confused. There were so many questions in my head.

"I was wondering about whether I was doing the right thing, what I could do with the certificate, how was I going to get students and more.

"I graduated in 1994 from the course and took over my teacher's role. I taught her students but they have all returned to Japan.

"In 1996, I started my own Japanese Dance School called Rei Tokukai, which is almost similar to my stage name Naya Reitoku.

"Now I have about eight students. I rented a studio in Tiong Bahru where I teach the students Japanese Dancing every Sunday.

"My youngest student is a 16-year-old boy who only just started a month ago and the oldest is a 41-year-old housewife.

"I'm still in touch with my teacher and would travel to Tokyo to perform for her event, which is held in February every year. .

"She was so supportive of me so I want to go over to dance for her.

"To celebrate my 25th year as a Japanese Dance teacher, I am holding a performance on Sunday (Nov 3) as it coincides with Japan's Culture Day.

"I have choreographed eight dances for this event where I'll be dancing with my students. I've also invited a famous professional artist who would also be performing eight dances.

"I hope people who are interested will come to the event so they can get to appreciate and understand the Japanese culture."