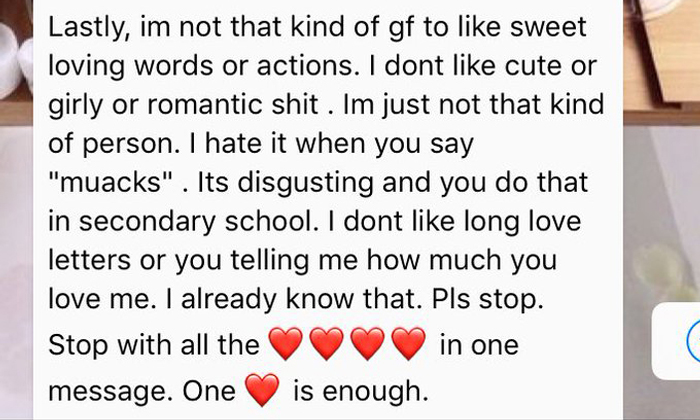 Not for this girl in Singapore, who chided her boyfriend for his list of supposed faults.

A friend of the guy had tweeted screenshots of the couple's conversation and expressed her distaste for the girlfriend.

The girl had texted him a long essay on WhatsApp about how she was going to be "VERY harsh and honest" with him for the "last time", and asked that he "read slowly and very carefully."

Here's a summary of what she is unhappy with:

1. He is too emotional

According to the girl, it is usually females who are emotional but even she has never "cried over stupid things like this". She said it is a sign of weakness and not love.

She also called her boyfriend "bloody sensitive", "worse than a girl" and told him to "man up" instead of "acting like a woman".

2. He's "not very intelligent" and blur

The girl complained that her boyfriend had no common sense and often misunderstood her words. Hence, she has to use basic English when speaking to him -- which apparently makes her "feel dumb".

She also feels disinterested when talking to her boyfriend because the things he says are "really stupid", such as asking her supposedly obvious questions about her bathing and sleeping habits.

3. His use of Singlish makes him sound 13 years old

Irritated at having to "stoop down" to her boyfriend's level so that he will understand what she is saying, she asked that he "stop talking like a 13-year-old".

"Your English really cmi [cannot make it]," she adds, reinforcing the importance of being proficient in the language like a teacher or parent.

Apparently, the guy is too dependent and "cannot live without" her. She feels that he does not have a life outside of their relationship, which to him is everything, but not to her.

"If I don't have it, I won't die. Whereas for you, it seems like you are going to kill yourself if I ever leave," she said.

This, to her, is "stupid thinking" and "very childish".

5. Four heart emojis are too many

As someone who does not like 'cute or girly or romantic shit", the girl finds her boyfriend's display of affections via long love letters, heart emojis and 'muacks' too much.

6. He makes her IQ go down and gives her a headache

The girl says her boyfriend is "behaving like a weak little boy who hasn't reached puberty yet".

Her IQ also goes down and she has a headache every time she talks to him.

7. She likes US and English shows, he enjoys Asian programmes and anime

Due to her westernised culture and upbringing, the girl does not like her boyfriend "spamming" and "texting" her all the time, or reporting everything to her.

Ending off her message, the girl also wrote, "I know an ah lian or typical Chinese girl would suit you much better. And an English-speaking, mature, older guy would suit me much better also."

She then said she was just trying to make him a better person, hence the hurtful words, so that he can be "successful and rich and happy next time" while she gets her "comfortable life".

Well, although may of the faults she listed sound like qualities other people would admire in a partner, you know what they say about how one man's meat is another poison.

Related Stories
Female passenger scolds Grab driver after he asks her out -- but was it all a misunderstanding?
Take a hint bro! Guy tells girl "You are mine", despite her flatly rejecting him
You'll probably dump your BF if he played such a cruel Valentine's Day prank on you
More About:
text
couple
dating
burn
burned exes
fail