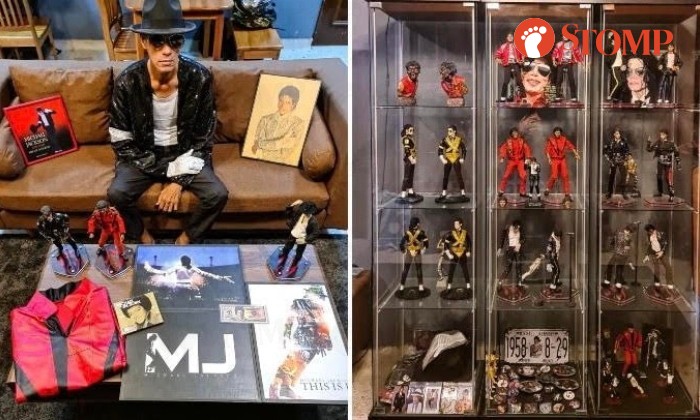 Everyone loves Michael Jackson, but only an avid fan of his would collect years and years worth of merchandise and have it on display in the house.

Stomper Mr Singh shared photos and videos of his Michael Jackson merchandise with Stomp on Monday (August 3) and added that he wanted to share his personal collection since the King of Pop's birthday was around the corner.

"I started collecting Michael Jackson merchandise around the 1990s," he shared.

"Back then I was just collecting his CDs, posters from magazines and T-shirts.

"After his sudden passing in 2009, I started collecting his action figures."

Mr Singh added that he has been a fan of Michael Jackson since he was 17 years old, when the singer released his Thriller album in 1982.

When Stomp asked what made him become such a huge fan of the singer, he shared: "It is just the whole presence and aura about Michael Jackson.

"He was a true all-rounder performer who caught my attention not just with his amazing tunes but with his extraordinary dance moves.

"I still remember some of the iconic dance moves such as the moonwalk which is still recognised globally.

"I fell in love with the King of Pop as he made a huge impact in my life," he added.