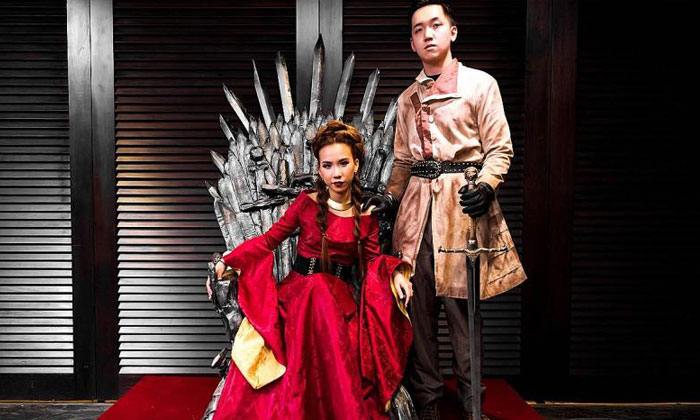 Winter is coming, but this local couple celebrated their wedding first. And no, it was far from the infamous nuptials that ended in bloodshed in hit television series Game Of Thrones (GOT).

It was not the only thing the couple, both 25, were stoked about - the much-anticipated seventh season of GOT premieres on HBO (StarHub Ch 601) on July 17 at 9am, with a same-day encore telecast at 9pm. It will also stream on HBO on StarHub Go and HBO On Demand (StarHub TV Ch 602).

Ms Lun told The New Paper: "We are really looking forward to Season 7. The latest trailer came out recently, and I had goosebumps everywhere just watching it."

Mr Lee added: "I cannot wait to see what happens to The Wall, especially when the White Walkers attack."

The couple's wedding party was held at Playhouse @ Hoot Kiam a week after their wedding banquet at Ban Heng at The Cathay, which also marked the second anniversary of their relationship.

Ms Lun and Mr Lee, who compete together in collectible card game A Game Of Thrones tournaments, dressed up as GOT's main antagonists Cersei Lannister and Jaime Lannister, who are incestuous twins.

Two Lannister family sigils were hung over the venue's front doors, and each room was transformed into a significant location from GOT, such as Casterly Rock, Lannisport and the Small Council Chamber.

The event, which took around three months to plan, cost about $5,000.

Ms Lun said: "The theme came about when we started getting into the A Game Of Thrones card game, and there is a huge community we hang out with almost every week.

"Since they know we were getting married, there was a joke going around that Derek and I are going to have the Red Wedding. Then we thought, 'Why not model the party's theme after the show we love?'"

The Red Wedding refers to the scene in the third season where two main characters were gruesomely killed during a wedding.

Many of the couple's guests adhered to the dress code, turning up as characters such as Sansa Stark, Daenerys Targaryen, Petyr Baelish and a Dothraki lord.

Attention was paid to every detail, from the official soundtrack playing in the background to props such as dragon eggs and wildfire.

The wedding march was the GOT theme song, and the wedding cake featured a miniature Iron Throne replica.

But the most striking do-it-yourself prop was the iconic Iron Throne, which could have passed off as the original.

It was constructed out of a coffee shop chair, foam, cardboard and papier-mache.

Mr Lee said: "Building it was the most challenging. It took six Saturdays and a day in between - Charlotte took leave from work - together with friends to complete it. It was time- and labour-intensive."

The replica was 1.7m high with a 1m by 1m base footprint.

Ms Lun added: "It was made slightly smaller because we had to transport it in a van. Even when we laid the throne flat, some swords got bent."

They used paint spray cans and dry brushes and applied a coat of light green colour for an oxidised look. Some sword hilts were laser-cut.

Ms Lun said: "Everyone took lots of pictures with the throne, and it made us feel accomplished, because they responded to it like they would the official version. It validated our hard work as a team."

The couple will display it in their future matrimonial home and offer it for rent at a nominal fee.

Their attire for the wedding party were designed and tailored by Ms Lun's ex-classmate, Mr Opie Sufian, from Temasek Polytechnic's School of Design.

Her gown was a replica of Cersei's from King Joffrey's wedding, with three wigs completing the look.

Mr Lee's outfit was similar to Jaime's in the first season, before the character's hand got chopped off.

He said: "I wanted the dirty, battle-worn look, so (Mr Opie) used coffee powder to stain the shirt to achieve that. I feel that we were our own re-imagination of the characters."

When asked why they chose to portray the Lannisters, Ms Lun said it is because her friends jokingly call her Cersei "Lun-nister", a play on her surname.

Mr Lee said: "It only seemed natural that I should be Jaime, as he is Cersei's lover, even though of course it is uncommon as they are siblings."

With a laugh, he added: "I cannot be King Robert (Cersei's late husband) as I am not old and fat enough, and he is already dead."