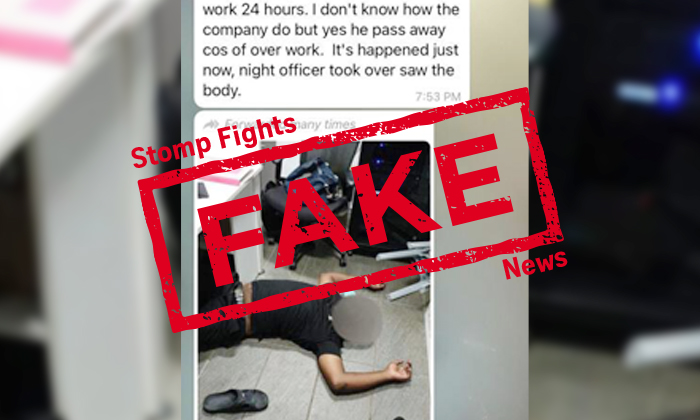 A local security firm has refuted an online hoax claiming that one of its employees died from overwork.

The hoax originated from a message circulating on WhatsApp, claiming that a Malaysian staff member at Cominco died after working 24 hours and that "he pass away cos of over work".

The text was also accompanied by a photo showing a man lying on the floor — in what appears to be an office — with his arms spread out.

Cominco said it learnt of the false rumours on Sunday (May 22), reported Lianhe Zaobao.

The company stated that the text messages were fake and clarified that the security guard in the photo had fallen asleep while on duty due to drowsiness from medicine.

The security guard is safe and well, said Cominco, adding that the hoax has spread on multiple online platforms and "seriously affected" the company's reputation.

Cominco is conducting an internal investigation into the incident and has also lodged a police report.